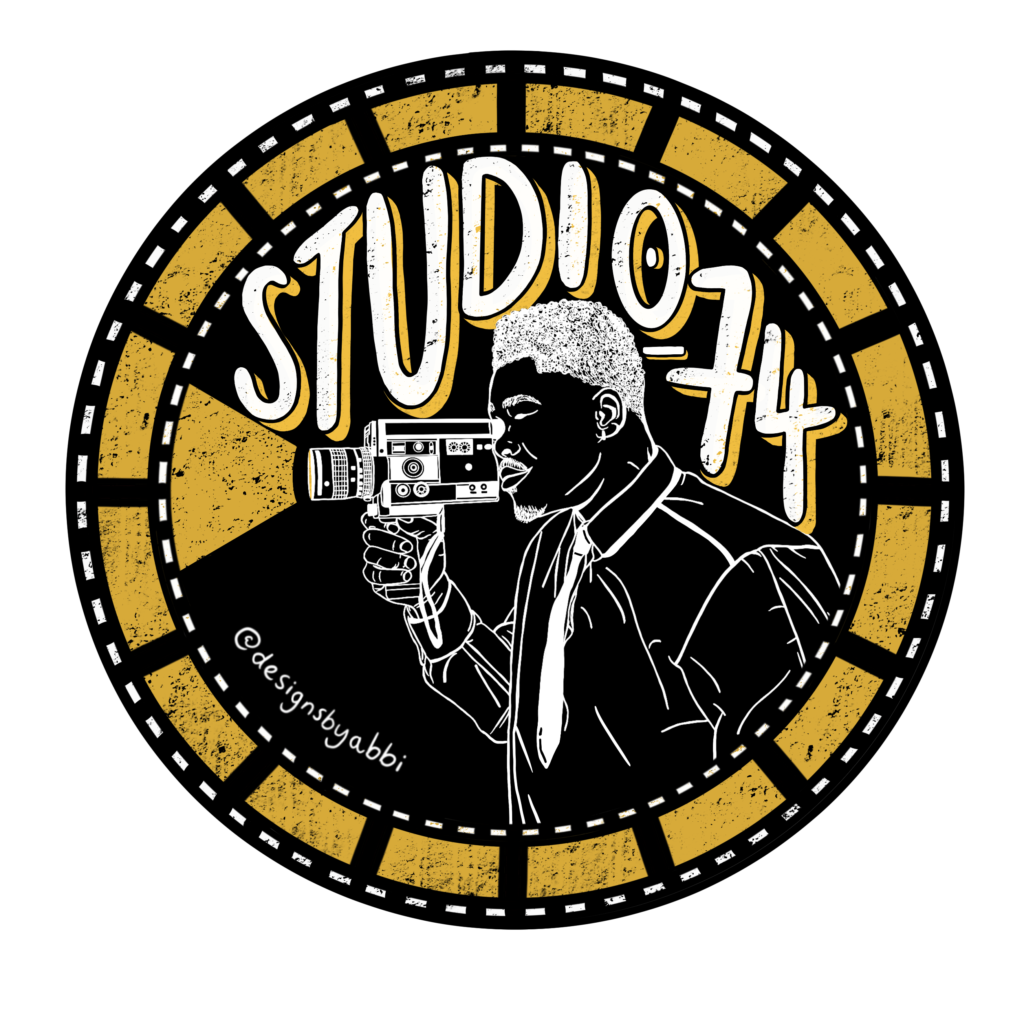 Studio 74 at Exeter Phoenix is the home of independent cinema. It’s the home of cinematic explorers and collaborators. It’s the cinema you want and the one you need. It is a place where brave films meet brave audiences. It’s where your voice makes Studio 74 your cinema.

In partnership with Exeter Phoenix Young Audience Panel and regionally based creatives Studio 74 is ready to amplify its mission to champion the best British and independent cinemas and make it available to all.

We asked six local creatives to redesign their version of our Studio 74 logo. Keep reading to find out all about each of the artists and their inspiration behind their design!

“My intention was to capture what I love about cinema: the artist direction behind films, black filmmakers and old Hollywood. It was great to have this individual freedom on the project.”

Abbi is a digital illustrator and visual artist currently in residence with MAYK. Abbi has experience working within Bristol Arts sectors such as Arnolfini and RWA, alongside being a Rising Arts Agency creative and the youngest member of the Visual Arts South West Steering Group. Her regional exhibition tour of her Black Portraits Project has been exhibited across the South West to Carnaby street Soho. Abbi is also a published illustrator of the children's books ‘Where is Summer’s Fluffy Cat?’ and this year's sequel ‘Why is my hair curly?’. Working for organisations such as the BBC, writing a podcast for the National Trust and illustrating the Big Give campaign for Arts and Health South West, Abbi earned her title by Rife Magazine as one of Bristol’s most influential people under 30.

Freefall is a collective of young creatives who meet each week at Exeter Phoenix. Their projects often respond to the work taking place in the spaces at Exeter Phoenix. They used a range of materials and techniques to approach the Studio 74 logo rebrand including screen printing and collage.

“It was really exciting to experiment and play with lots of different techniques. I liked being able to think about the branding and it was particularly exciting to have the opportunity to see our work on screen!” Freefall Member 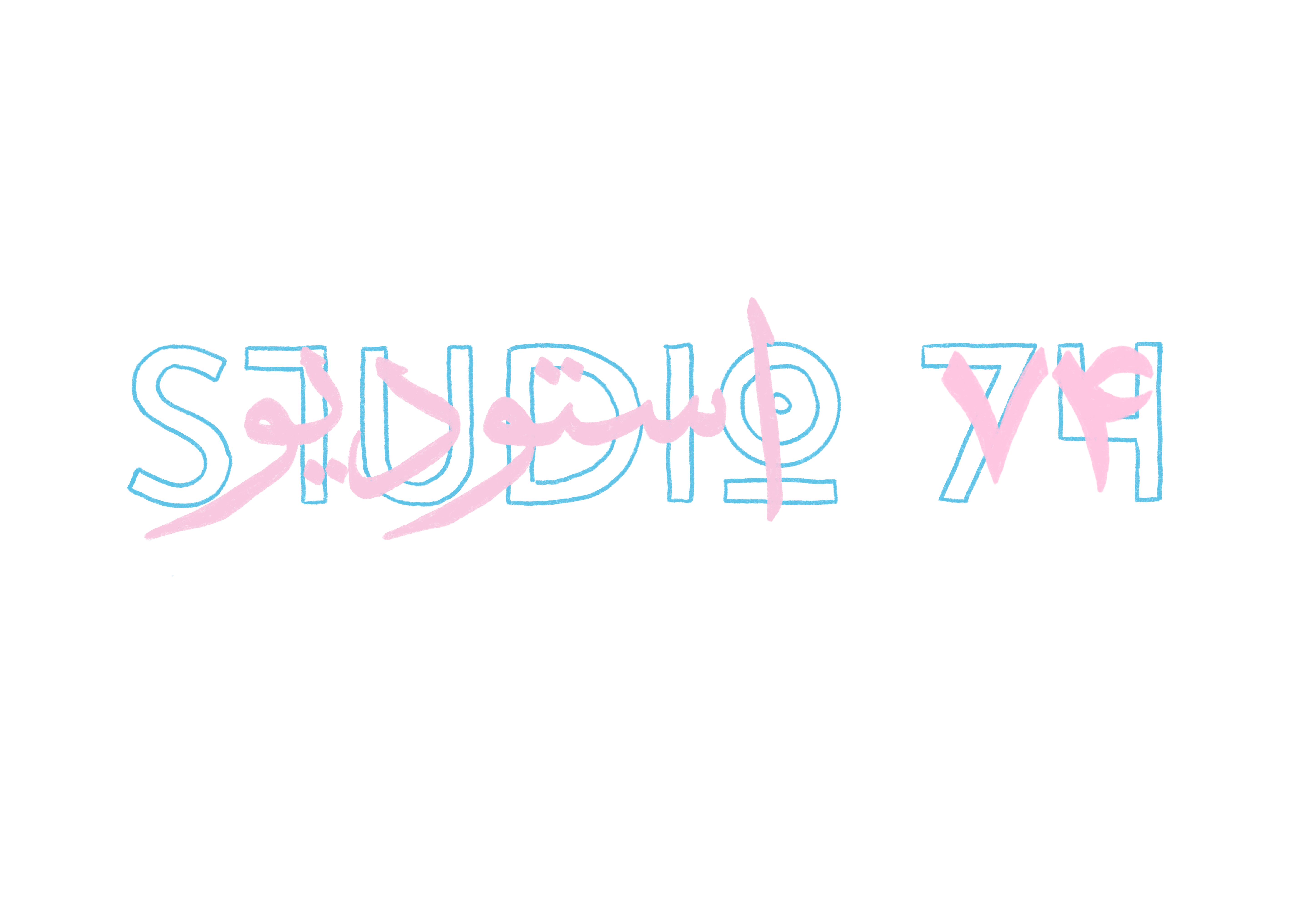 “For me it was just an extension of playing with my dual-nationality. I hope the colours give that sense of open-ness and communicate the inclusivity to those underrepresented, but also show Studio 74’s ability to adapt into different culture and be welcoming to all.  I chose to do everything by (digital) pencil also, because I think the homemade feel of it creates something more nostalgic and welcoming.

The language is Farsi, and it’s just a translation of ‘Studio 74’ written in quite traditional calligraphy. Iran also has a really unique independent cinema community, with loads of distinguishable filmmakers – Kiarostami, Asghar Farhadi etc.”

Arsalan is a member of Exeter Phoenix’ Young Audience Panel and is currently finishing his MA in International Film Business at Exeter / London Film School.

He is excited to play a small role in drawing more diverse audiences to Phoenix, to more closely align with the increasingly diverse filmmaking talents and subject matters that are being represented on the big screen.

Darren Shaddick is a Freelance Illustrator and Graphic Designer based in The Sticks of North Devon, UK.

"I went into this logo rebrand with no prior intentions apart from the fact that I wanted to spontaneously explore hand drawn type, textures and patterns.

I divided the logo into sections that have their own distinct visuals, this represents the variety of film that Studio 74 puts on.

To me, each segment of the logo rebrand looks cinematic with visual cues inspired by art deco cinemas and the flatness of vintage movie posters."

“I'm all about drawing words these days - which is great considering I was never given my "pen license" in primary school. When I'm not writing on chalkboards for people, I'm creating art with anything I can get my hands on (like broken plates!). The best part of making art is the surrendering to the process of it, and how you navigate your way to an unknown end point of your choice.”

Scotty Gillespie is a multidisciplinary artist who makes bright and optimistic imagery franging from digital illustration, animation and ceramics.

Open seven days a week and with tickets starting at £5 Studio 74 is ready to welcome you all. Click the button below to take a look at our full film programme!