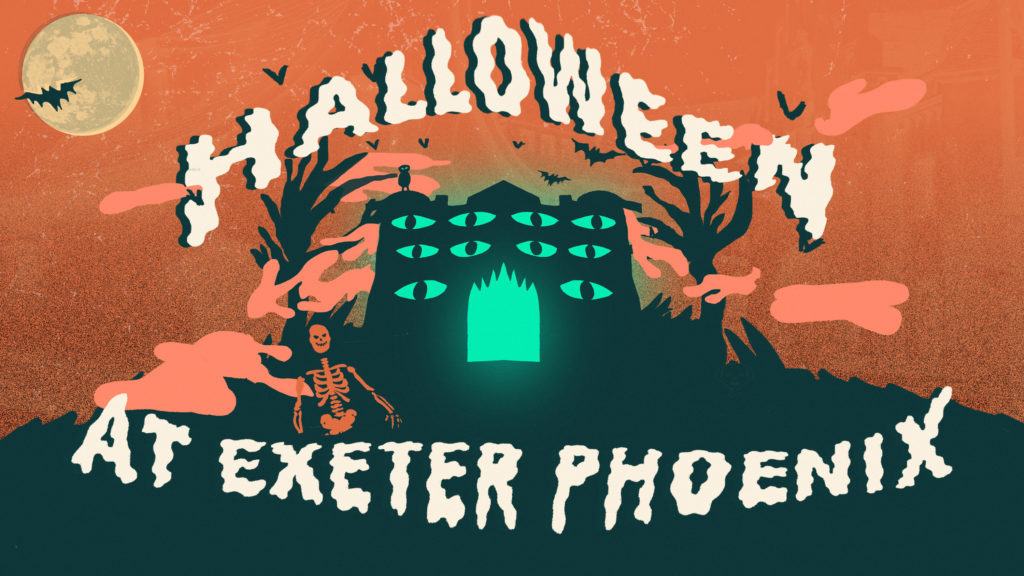 This Halloween Studio 74 has handed the keys over to our Young Audience panel who have curated a weekend of cannibals, wicked conventions and unexpected consequences.

While exploring ideas for the programme the Young Audience Panel began to pick apart our relationship with Halloween and horror. Here, the panel and Studio 74 Collaborators share their thoughts.

“This year, I’m going to bite the bullet and finally watch Takashi Miike’s Audition followed by vintage classic Cat People and hopefully make it out alive”.

Every Halloween, I tuck myself in for the night, dim the lights and watch a double-bill of some of the scariest, weirdest, funniest and beautiful horrors out there.

When I first decided on this mini scare fest, the year was 2017, I was home, alone, in a dark creaky Victorian cottage; naturally the perfect setting. It was the year I got obsessed with anything David Lynch breathed or touched, so of course the perfect line-up would be Eraserhead (1977) with a Lost Highway (1997) chaser.

Lynch’s first feature film, Eraserhead is a melancholy, confusing, dark and sorrowful meditation on fatherhood, identity, loneliness and aspirations; a classic ‘midnight movie’ in indie cinemas when it was first released. As baffling as Eraserhead is, it was Lost Highway that truly left me with chills. With a mysterious stalkerish man that lives in a wooden hut out in the desert, mistrustful identical twins, wrongful incarceration and crazed jazz solos, it’s an uncomfortably intimate look into the seedy underbelly of 90s America.

Last year, armed with a couple of San Miguels, and in the true height of lockdown extraness, a sourdough baked into the shape of a pumpkin, I revisited Italian giallo classic, Dario Argento’s Suspiria (1977), the sumptuously shot cautionary tale of the prestigious dance school with many secrets to hide. Released in the same year, I ended the night with the weird and wacky cult favourite Hausu (1977), complete with evil cats, girl gangs and slightly dodgy green screens.

This year, I’m going to bite the bullet and finally watch Takashi Miike’s Audition (1999) followed by vintage classic Cat People (1942) and hopefully make it out alive.

ANTHONY ANDREWS – We Are Parable

ANTHONY ANDREWS | We Are Parable

“One thing that terrifies me to the core of my soul is Triplets, the now greenlit sequel to Twins”

In terms of films, one thing that terrifies me to the core of my soul is Triplets, the now greenlit sequel to Twins, starring Arnold Schwarzenegger, Danny DeVito and Tracy Morgan. I mean, just who is going to watch that? I generally have a fear of sequels coming out decades after the first, relatively well received film. That and films with Ryan Reynolds in them.
Outside of film, I would say it’s the undefined fear of something stopping me doing what I love.

I think films that give me goosebumps aren’t normally blood and gore for me, but those that are steeped in some kind of reality. I felt a real sense of unease after watching Prisoners, for example.

Halloween isn’t really a thing in our house, so we don’t celebrate it. Our kids do love the Goosebumps books and films, though.

I’ll settle for watching something like Scream 2, which I believe is the high water mark for the franchise. The first Nightmare on Elm Street is incredible (I remember being way too young to watch it with my friends at the time – we watched it in the middle of the afternoon so we didn’t get too scared!), Dawn of the Dead is great too. Anything by Sam Raimi – Drag Me To Hell is actually amazing, talking goat and all. Also Audition by Takashi Miike, which I’ve seen just once in 2000 but has stayed with me for well over twenty years!

My wife hates Horror, so for ages I stopped watching them, but after stumbling on a few titles over the last couple of years, I forgot how much I appreciate the thematic tropes.

“The skins between worlds do indeed grow thin on Halloween.”

It seems funny to me now looking back, that a season that has become synonymous with me, my art, my everything, was once a season that I feared. Of course, back in the 1970’s and early 80’s in Britain Halloween was not celebrated to the extent that it is today. The occasional children’s party might pop up once in a while but I don’t remember ever dressing up, ever being visited by trick-or-treaters or even carving a pumpkin. No, it was something altogether different back then. Halloween was a night when the things that you feared every other night had the opportunity to edge just that little bit closer. It was the night of vintage Horror double bills on BBC2. It was a night when the skin between the worlds grew thin and night falling was not a time for celebration. Especially for a child that suffered from night terrors.

Although I’d always loved monsters, I was terrified of ghosts, having grown up in a family that never spoke of them lightly. The dead were close. The supernatural was not something to mock. So, it seems funny that I should ever dare to read Usborne’s Supernatural Guides after dark. Although their first ‘All about Ghosts’ had its fair share of chilling stories, illustrations and unexplained photographs, it was this illustration from the later ‘Haunted Houses Ghosts & Spectres’ that would scare me witless. Indeed, eventually I had to make sure I skipped that page to ward off visions of that blue floating face dripping blood hovering at the end of my own bed.

Things are different now. In time to ward off night terrors I came to embrace horror in all its guises, learn of the craft, of the authors and the anatomies of all those things that go bump in the night and make a friend of them. Halloween now is a time of celebration. It’s a time that my daughter Lily Wednesday (Lily as in Munster, Wednesday as in Addams of course) starts to eagerly plan for the moment October arrives and the night itself is full of games, spooky movies and all the confectionary you could possibly stomach.

But once the children are sleeping and the doorbell stops ringing,  the house settles and slowly the old feelings often return. But with a slight difference. The skins between worlds do indeed grow thin on Halloween. Now, it’s the night wherein your world gets a glimpse of mine.

I grew up in Germany where Halloween was not really recognised and Trick or Treat was not a thing. However, that didn’t stop me and my brother doing our best to score sweets from our neighbours. Members of our community would not know what to make of two small boys standing on their door steps dressed in make shift ‘scary’ outfits demanding sweets.

“I am not afraid to admit that the show got right under my skin.”

Cartoon Network released a mini-series a few year’s ago called OVER THE GARDEN WALL. It is for children but I am not afraid to admit that the show got right under my skin. It is animated with great music and it has a spooky 1920 feel to it. There is a cosy and sweet facade with a sense that something is deeply worrying and everyone of going to die. It has talking animals in. Naturally, watching it has become a bit of a Halloween tradition.

View the trailer to OVER THE GARDEN WALL here – https://www.youtube.com/watch?v=36mAsVSH_-s

As an adult I love horror. Scary = Delicious.

As a child I was scared of EVERYTHING.

If I was scared of something even the word would set me off and I would insist that my parents only use the first letter. So I would say, “Don’t say witch! Say ‘W!”

Witches used to scare me the most and I swear to this day that looking out of my bedroom window I saw a witch flying. I still can’t find a reasonable explanation for what I saw.

I love horror and have always enjoyed the sensation of being scared or frightened. I have two older brothers, one of which delighted in sharing his video nasty collection, ghost stories and general obsessions with the unworldly. It takes a lot for films to frighten me but he and I used to flick through his book; A DICTIONARY OF GHOSTS. The pages were littered with old Victorian photos with ghostly children in the background and tales of the unexplained. Terrifying.

I have just finished reading The Witches to my seven-year-old so this Halloween I will be brining her to Studio 74 to watch THE WITCHES. She is just like me and doesn’t scare easy but I can’t help thinking Nicolas Roeg’s twisted interpretation of the Grand High Witch might have some effect.

“Are people interested in tangible, “this could happen to me” scenarios where there’s an implicit level of relatability with the film’s circumstances?”

On approaching the Halloween season at the cinema…

The aptly-titled, John Carpenter-birthed “Halloween” franchise might be a good guide as to what moviegoers seek in the Halloween season. It certainly ticks a lot of boxes: jump scares, violence, and some quasi-human, near-supernatural antagonist. But is that exactly what defines a “Halloween” film? Are people interested in tangible, “this could happen to me” scenarios where there’s an implicit level of relatability with the film’s circumstances? Or perhaps totally farfetched stories of an unknown and unpredictable threat are what hooks viewers in?

Then comes the consideration of if fear is even what’s sought after. Lots of “Halloween”-adjacent films, namely th

e animated films of Tim Burton and/or Henry Selick, tread light with horror tropes and instead lean on imagery traditionally associated with Halloween: ghosts, the undead, skeletons and whatnot. Maybe the focus should be on the dressing-up part of Halloween, emphasising an event that’s largely an entertainment source for most people?

This isn’t to say that one way or another of interpreting the cinematic definition of “Halloween” is better or worse than another. The intention here is to merely provide the lightest of food for thought before perusing any collection of films labelled suitable for “Halloween”; there certainly seems to be more nuance to what’s desired of cinemas during the Halloween period than at first glance.