Ajvar: A Labour of Love 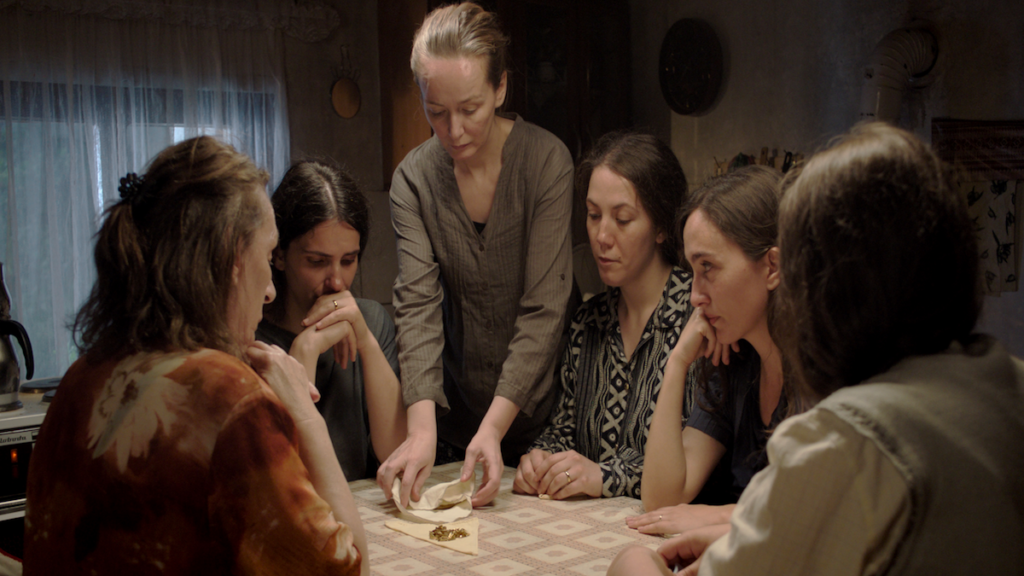 In the film Hive, Fahrije and the other women in her village use their ajvar making skills to improve their financial situation. But what is ajvar? How’s it eaten and where?

Dr Celia Plender, who teaches a course on food preservation for the MA Food Studies at the University of Exeter finds out more.

In its most basic form the Balkan, roasted, red pepper paste ajvar (pronounced eye-var) is made from just three ingredients – red peppers,sunflower oil and salt. But to make it properly takes a lot of effort. Kushtrim who grew up in Pristina, Kosovo told me, “the way it’s made is completely crazy. It takes hours… days.” While Maria from Macedonia explained that “it’s a labour of love. It’s virtually impossible to make it by yourself. You needneighbours, you need family members. It’s an elaborate teamwork task. Butall that effort and all that work is really rewarded when you get the final product.”

In Maria’s hometown in Macedonia, the air would be filled with the smell ofroasting peppers in the autumn months when she was a child. You could often tell which families had been making ajvar, as children would come to school with nails stained red from peeling peppers. In her own family, there was always a jar in the fridge during the winter months and she had fond memories of having red lips from chewing on bread spread with the red pepper paste while playing hopscotch. Each autumn, large sacks of long, pointed, red peppers can be found all over the Balkans to be roasted, peeled, de-seeded, minced and cooked down into the thick, sweet and smoky paste known as ajvar. At times, other seasonings and ingredients are also added, such as chilies, aubergines or tomatoes, and while red pepper paste is known as ajvar in countries including Kosovo, Macedonia, Albania, Serbia, Slovenia, Bosnia and Croatia, there are other variations in Bulgaria and Romania such as Lyutenitsa and Zacusca.

Like many of the preserved foods that we study on the MA Food Studies, ajvar is associated with the practice of processing and storing ingredients for the leaner months. Dr Miladina Monova, whose work we look at, explains that it’s considered a staple that’s precious in the winter months not only for its nutritional value, but also for the work that goes into it.

Anna, a British anthropologist who runs Bolara Šešanta guesthouse in Croatia came to appreciate this when she started making her own ajvar. Although much of her other homemade produce circulated freely as gifts, her Croatian friends told her to hold on to her ajvar. On the occasions that she did give it away, she started to see a difference in how it was received by those who had a connection to ajvar and those who didn’t, who might let it languish at the back of a fridge rather than being savoured as it deserved.

Kushtrim still looks back with some nostalgia at the jars of ajvar that his uncle used to gift him and his parents when he was a child. This was cooked in a traditional pasllom or “cooking house” where peppers were roasted on a wood oven stove and then cooked down in a large cooking pot over an open fire. While other families might add ajvar to eggs with cheese and mushrooms, Kushtrim’s parents were more traditional, simply serving it spread on warm, crusty bread for breakfast or a snack, perhaps with a little bit of sheep’s cheese on the side.

Ajvar not only evoked strong memories for many of the people I spoke to, but also connected food, people and place. For Nina, a student on the MA Food Studies, whose family comes from Serbia, ajvar was often eaten as a condiment with kebab-like ćevapčići. Having grown up in the UK and USA, the pepper paste was a precious gift that usually arrived in a suitcase inside a recycled jar (a “classic of Balkan homemade goods”) when family members came to visit from home. Later, when she moved to Los Angeles, she found ajvar in a local Bosnian café. But she saw this “bought” version as a “bad
imitation” of the homemade kind. While she could make do when necessary, it made “the experience of going back to Serbia or Croatia and getting a spoonful of real ajvar the best thing ever.”

In all my conversations, there was a strong distinction between the kind of ready-made ajvar you find in Balkan shops around the world and the homemade versions shared between family and friends, or sold at small scale by local makers. More than just a food, this kind of ajvar expressed the time, effort and care that had been put into it by its makers, creating powerful connections between people and places.

Find out more about how to make ajvar: