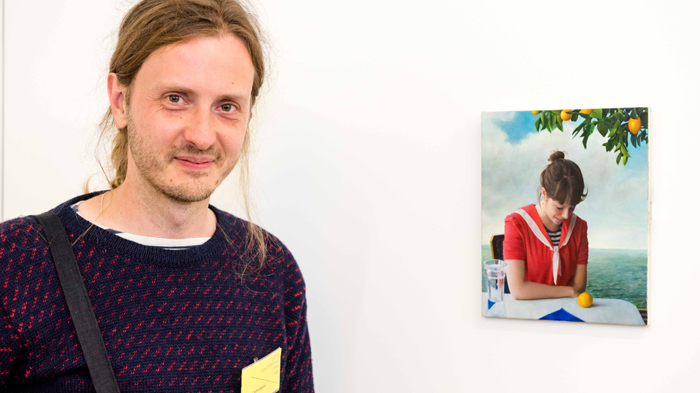 London-based artist Gareth Cadwallader has today been announced as the recipient of the £200 Audience Choice Award, as voted for by visitors to Exeter Contemporary Open 2017.

Cadwallader, who was also nominated for the prestigious Celeste Painting Prize this year, is exhibiting four extraordinary and intricate oil paintings of hyper-realistic yet dreamlike scenes that have been fascinating visitors to Exeter Phoenix for the last month.

At an exclusive awards ceremony and exhibition opening back in September, Aimee Parrott was announced as the winner of the prestigious £1000 Overall Award, with the £500 Additional Award going to artist Olivia Bax for her steel, plaster and clay structures. Visitors to the gallery have been voting for their own favourite over the course of the exhibition since then, with the result announced on the eve of the final week and last chance to see this year’s exhibition.

Exeter Contemporary Open is an annual exhibition open to submissions by contemporary visual artists from across the UK and beyond. This year’s exhibition includes a shortlist of eleven artists, selected from several hundred submissions by independent curator Kristian Day, Founding Director of VITRINE (London/Basel) Allys Williams and our own Gallery Curator Matt Burrows.

The event is generously sponsored by Haines Watts Chartered Accountants, who believe in the importance of providing a national platform for emerging contemporary visual artists. Ben de Cruz, Managing Partner of the firm said, ‘The exhibition is a beautiful display of contemporary art. Haines Watts were pleased to support this exhibition as the main sponsor.’

Entry is free to the exhibition, which will run until Sunday 5 November 2017.