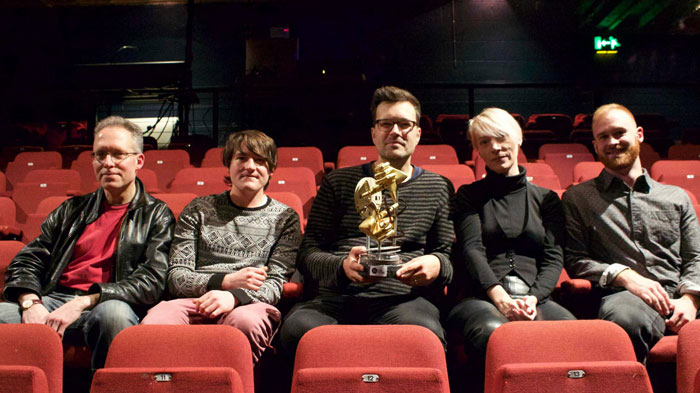 Pictured:  Paul Parncutt and the team behind Cloaned with their award for Best Short Film Commission.

Exeter Phoenix’s annual short film festival, Two Short Nights, brought flocks of filmmakers, viewers and industry specialists to the city last week in a celebration of short films and the people who make them.

With an emphasis on local filmmaking talent, the festival’s opening night on Thursday included the 48 Hour Film Screening, a collection of films written, shot and edited in just 48 hours. Supported by Cineon Productions filmmakers were in with a chance of winning £150 worth of equipment or training.

Toby De Burgh of Cineon Productions said ‘It has been great to support local filmmaking in this way and we were really impressed with the standard of films in the competition.’

Friday’s festival line up featured a sell out screening of Exeter Phoenix’s five film commissions of 2015. Jonas Hawkins, Digital Media Manager said: ‘The festival is all about offering a platform for new and emerging film talent and connecting filmmakers with a cinema audience’.

Other festival highlights included the International Shorts Screenings, a curated selection of inspiring short film from directors across the globe and a Live Pitch from filmmakers competing to win the £500 2016 Devon Documentary Commission. An award ceremony and after party brought the festival to a close.

Scott Willis and John Batty for What Do You See?

Simeon Costello won over the panel at Friday’s Live Pitch with his proposal to document his journey around the perimeter of the UK using only public bus transport on local routes.

This year’s awards were made by art students from The Maynard School with each one embodying it own bespoke design.