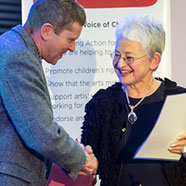 We’re delighted to share with you the news that Theatre Alibi’s Daniel Jamieson has won a prestigious award for his plays for children.

Daniel won the award from Action for Children’s Arts after being nominated by the artistic director of nationally acclaimed children’s theatre the Egg in Bath, who commended ‘his original plays for Theatre Alibi that place children’s experiences of the world right at the heart of his exciting, profound and fascinating stories‘.

Action for Children’s Arts is the UK’s leading organisations promoting the value of the arts in children’s lives. The award was presented by bestselling children’s author Dame Jacqueline Wilson.

Theatre Alibi return to Exeter Phoenix with their latest show Olive And The Dream Train later this month. Find out more here >>