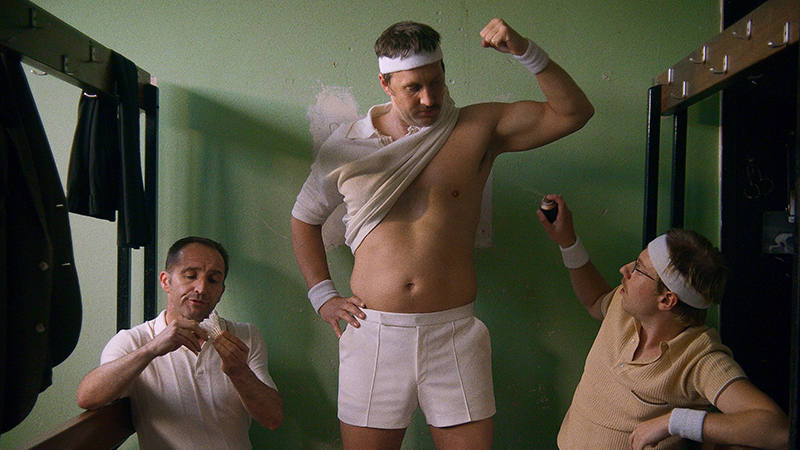 Tommy Gillard’s short film Shuttlecock scooped the award for Best Short Film at a virtual awards ceremony from the prestigious BFI London Film Festival last night. The short film was made in Devon, having been commissioned and supported by Exeter Phoenix, whose filmmaking bursary schemes offer vital support and development opportunities for filmmakers in the region.

Written and directed by Honiton-based filmmaker Tommy Gillard, Shuttlecock is a sports film like you have never seen before. The 13-minute comedy centres on the macho Carl, who is forced to confront his idea of masculinity when an obsession with a mysterious new member of his badminton club spirals out of control. Using a whole host of talent and crew from Devon, the film was shot across three days in Sidmouth College’s now demolished old-school sports hall.

The film premiered at our Two Short Nights Film Festival last November in a special screening event which featured all four of Exeter Phoenix’s 2019 commissioned films. Shuttlecock was then selected as one of just 47 films to make the cut at this year’s BFI London Film Festival – one of the biggest events in the UK cinema scene’s calendar.

“I’m thrilled to have won the LFF Best Short Film Award for Shuttlecock. Working with Exeter Phoenix to realise the film has been an amazing journey, and really shines a light on how important regional arts centres are, especially now. I’d urge every filmmaker to use and work with the arts venues close to them, as they can really push you to make your best work!”

“We couldn’t be more excited with Shuttlecock’s success at the BFI London Film Festival.  It has been really rewarding to be able to support Tommy and his team from the very beginning.  They have worked so hard and it’s wonderful to see them getting the recognition they deserve.  We can’t wait to see what they do next, and hope that it encourages other regional filmmakers to get involved with our commission process!”

“There was never a moment in this utterly crazy year when we considered not delivering a BFI London Film Festival. We know LFF means too much to both filmmakers and audiences. So how fitting, then, that we put audiences in control of the Awards this year with our first Virtual LFF Audience Awards. And dammit, don’t our audiences have great taste?!”