Q&A With Crystal Moselle: Director of The Wolfpack 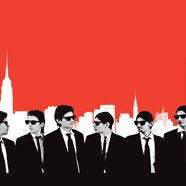 Exeter’s brand new independent cinema Studio 74 opens its doors with the sensational documentary The Wolfpack. Winner of the Sundance Film Festival Grand Jury Prize, this The Wolfpack takes you into the extraordinary world of the Angulo brothers who have been locked away from society for 17 years in a New York apartment. Their only experience of the world is through the films they have watched, and when one brother ventures outside, it changes everything. Can they integrate into society and still maintain their close-knit brotherhood?

If you can’t wait to see The Wolfpack read on for a Q&A with the documentary’s director, Crystal Moselle.

How did you first meet the Angulos, and when did it develop that you would make a documentary about them?

About five years ago, I was cruising down First Avenue in the East Village and these kids with long hair ran past me, weaving through the crowd. I counted one, two three of them…then three more. My instinct took over, and I chased after them catching up at a stop light. I asked where they were from and they said “Delancy Street”. They mentioned how they were not supposed to talk to strangers but wondered what I did for a living. When I told them that I was a filmmaker, they got really excited, exclaiming, “we are interested in getting into the business of filmmaking.” We made a time to meet so I could show them some cameras.

This was the start of our friendship. I started filming them here and there while teaching them and encouraging their film endeavors. About 4 months in, I was able to come into their home. This is when I realized there was a deeper story and continued from there – we shot for almost 5 years

How did the boys react to being filmed?

It was a roller coaster. I was dealing with adolescent boys, so I got all sorts of reactions.

When we started, everybody was on board to shoot but it took years to get some of the tender moments where they really opened up. It wasn’t easy at times but dealing with teenagers in general isn’t easy; I’ve had experience with this age range before in other projects.

Can you tell us a little bit about your filmmaking work aside from this film? Did any parts of this movie make it into other projects of yours?

I’ve been doing short form directing for many years. I have worked with Vice, New York Times and Nowness on several projects. I also shoot commercials and music videos.

I did work with the boys on a project for Nowness called “Lightning People” where I followed them around the city in a more artful way.

How did the parents take to being filmed? Were they worried at all about how they may have appeared, as their children had been in their apartment for so long?

The parents were open to the idea of documenting their family – I feel like they saw opportunity for their children. I’m not sure they realised how in-depth the project would get. I think there was some anxiety from each of them over the film, but they were always open and wiling to film. Now that they have seen the movie there is nothing but positive enthusiasm for the project from both of them.

When filming, were you tempted to intervene in the boys’ lives in any way, or help them get out of their apartment?

When I came into these boys lives there was nothing that alarmed me about the situation. They seemed stable, well cared for and educated by their parents (especially their mother). If I had come one year earlier things may have been different. Also, at the point I came into the story the boys had started their rebellion against their father and the power in the household had shifted. They did not seem to need or desire for me to intervene.

What I did do was to encourage them explore their interest in filmmaking, by helping them to get internships and introduce them to people in the film industry.

In the movie, the boys make an obvious progression, starting as very isolated characters but thrilled to learn more about the outside world. The mother seems to undergo a bit of a similar transformation – nervously testing her limits. How did she seem to progress from when you started shooting to when you ended?

Susanne feels like a different person to me now. When we first met she was more submissive and reserved. I think her children’s step towards freedom and socialization really helped her stand up for her own rights as well. It’s a process but she is well on the right path to gaining her own independence.

In the film, we see the boys’ sister Vishnu, but we don’t hear too much about her. Can you tell us a little bit of her story? Why did you decide not to use much of it in the final film?

Visnu has Turner’s Syndrome, which is a genetic condition in which a female does not have the usual pair of two X chromosomes. She can’t communicate as well as the others, and the film really shaped up as the story about the brothers breaking free. She was of course a part of it and is very much a part of the family. They have a really wonderful relationship with her – they take her to the beach and include her in their Halloween festival every year.

It’s interesting to see what an advanced aesthetic the boys have in the movie for people who are so isolated – both in their movie taste and their personal style. How did they end up seeing so many movies and where did they develop their personal wardrobes to that extent?

Their dad brought both classic and cult movies to them. They liked the violent, horrific, morally complicated films the best. As they read more about movies they started to request specific films.

The boys first saw Pulp Fiction on television, and this started their Quentin Tarantino obsession. It opened their eyes to film outside the realms of the standard Hollywood films they were used to watching. Since films were their world, they started to interpret these looks into their wardrobe. Their personal style is directly related to their favorite characters from their favorite movies. A lot of their early costumes were from clothing their dad would find on the street and at Salvation Army, which they would re-work by hand into specific costumes. For example, they’d tape blue Nike swooshes on tennis shoes to look like Marty McFly’s, or cut up a woman’s rain coat and sew it into the shape of Mad Max’s leather biker vest.