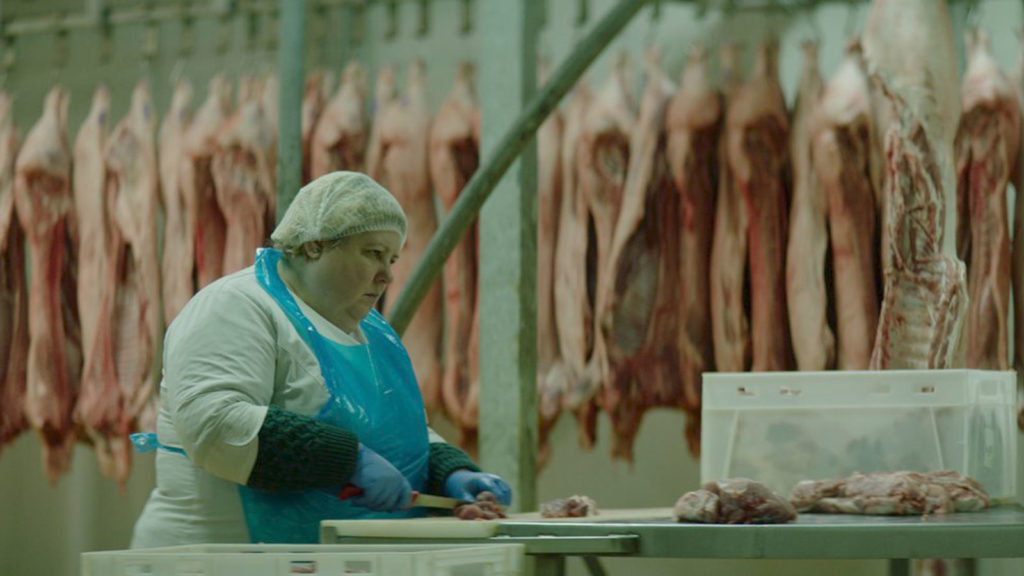 Here festival collaborator Olivia Leonard reviews Dekel Berenson’s short film ANNA and sees the warmth and beauty of a character who represents the very real woman in all of us.

In the age of app dating, where “love” and matchmaking is a finger swipe away, it’s hard to imagine that elsewhere marriage agencies are still very much a key player. A quick search on Google and you could potentially be on your way to buying yourself a wife. Each website lists page after page of women, aged 18 and upwards. So begins the rabbit hole of marriage agencies, in ex-Soviet Union countries.

The reality of this being that many women living below the poverty line, view meeting a foreign man their, “…only way to break the circle.” As Executive Director of the Ukrainian Film Academy states on the film’s YouTube channel.

Another reason for joining the books at a marriage agency could be due to the higher percentage of women than men within the Ukrainian population. With 86.3 per 100 women recorded in 2015. In turn, this can also be attributed to a history of war and women possessing a longer life expectancy than men. And so; the 16th century old, English originating, concept of the ‘marriage agency,’ establishes a market. Often they are fuelled and funded by desperation and deceit as an attempt to flee a difficult life.

Dekel Beresnon’s story of an honest woman’s search for love, is told from the icy surroundings of Donbas, in War-torn eastern Ukraine. A radio announcement, heard at work, promising the chance of meeting attractive, intelligent foreign men, at a single’s ball, presents a vital opportunity for Anna.  Anna is an ageing, single mother of a teenage daughter, working in a meat factory. Her situation is challenging both financially and emotionally. Against the harsh grey and cold environment, her goals are not of a superficial nature; she wants love and a better life for her family.

As actor Svitlana Baradich – who plays Anna in the film - reminds us, “Loneliness. It’s a feeling without borders. That’s why it’s so understandable to everyone.”

We first meet Anna, clipboard in hand, as she and her colleague conduct an inventory from the dead pigs suspended from the ceiling. The static shot adds a documentary layer to the narrative. As they peruse the inventory of meat, at that exact moment, an American man could be seen perusing a catalogue of single, Ukrainian women online.

There’s a warmth and simplicity to Anna that melts through the chill of the USSR. We see her walking in the snow, past drunken men heckling women to join them for a drink. “We won’t hurt you, you little shit,” shouts one man to a woman exiting the frame. Anna continues, un-phased and unassuming and begins to leave food in the snow for local homeless dogs. As Baradich says, “She just wants to do right by someone.”

For me, this was the first example of the simple beauty of Anna. Despite not being a conventional beauty, she is beautiful.  As a woman watching this, I was appreciative to see a male director that didn’t make the two mutually exclusive. After some reading online, it appears that Berenson’s modus operandi is to tell the stories from disenfranchised women across the globe. Even in this short snap shot of life in the Ukraine, I felt like I gained more insight than I perhaps have in any news reporting since 2014.

Throughout, there is a brutal contrast between what we think about love and the life that Anna actually leads. Berenson’s use of dry nuances in humour works to defuse mounting sadness and allows for the film to become universally relatable. My favourite example being, when Anna is chopping up meat but pauses to listen to this radio announcement. Momentarily she thinks of love. Although the cutting of the meat in this instance isn’t aggressive, because it’s her job – and she actually does cut through it with a strange grace – it’s also comedically reminiscent of how a lot of us feel, when we think about past loves.

The meat factory proves to be the perfect setting for Anna’s work life. When I’ve thought of a job I hate, I sometimes can drift into a violent - yet laughable - internal monologue, running like a scene. In one case, a corporate boss really was a pig with an apple in his mouth. In the case of Anna’s profession, most vegetarians and vegans would certainly perceive it as a violent one. This adds a real unstated wit. For me, it’s provides a subtle correlation between hating one's job and the hopeful dreaming that goes on whilst at work.

As the film progresses the wit accelerates with each stage of agency protocol. Firstly, when meeting a marriage “agent” and then during a conversation – complete with interpreter – with a potential, American, “love-match.” Anna’s honesty and integrity manages to remain intact when it seems everyone within the programme is losing theirs. She refuses to fall into the archetypal mould that has been carved out for her. A mould in which Ukrainian women are solely homemakers who enjoy cooking, cleaning and having sex when their husbands want to. Much like her American friend she likes, “Travel, mountains and Jesus,” but Berenson’s once again pushes our perception of Anna, beyond the on-going translation of her date.

Anna is strong but earnest in her search for love. What she is seeking is humble but her reality is cruel. Days after you have finished watching Anna, you will think of real women just like her.