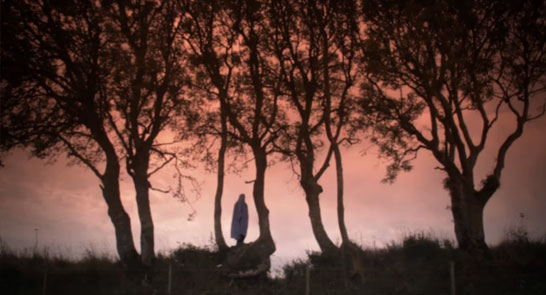 What is the genesis of your new work, Landscape II?

I was interested in working with film and projection in my new show and how the use of film could combine with sound and language to create an intimate and revealing portrait of three women’s shared experiences. The work continues my interest in female subjectivity and explores the meaning and significance of female inheritance through generations. between children, mothers and grandmothers.

How would you describe what Melanie Wilson makes?

I try to make work that moves an audience deeply and makes it think but tries to do this with delicacy and wit. I make worlds in which an audience can become immersed in and be transported by and try to do this with closely woven strands of sound, language and live performance. It is a very pure and direct sort of theatre and leaves the audience room enough to think for themselves without ever loosing the connection between them and the subject matter.

How did you get into making this kind of work?

I have a great passion for the theatre as a listening, thinking space and I use poetic text and sound to do this. I have always been interested in music and wrote and read a great deal when I was small and growing up. These early interests were brought into focus at Central School of Speech and Drama, where I did the MA in Advanced Theatre Practise and in the years after were forged into the particular artistic practise I have through key collaborations with other artists.

What is Landscape II about?

Why is the show called Landscape II?

Firstly, because the two main characters are situated in the same landscape, a century apart. Secondly, because photography and portraiture and the attendant themes of looking and being looked at are a key feature of the form of the performance.

How did you become interested in the stories of these three women and across generations?

The story of it was something that came to me whilst spending time in the location of North Devon. I was prompted to include the experience of the thitd character, an Afghan woman, by news events at the time I was writing the piece.

What research did you undertake, if any?

I researched war photography and photographers on the internet and read widely around the political subject matter.

It draws upon the real experiences of women in Afghanistan, but these have also been fictionalized to an extent.

If you had to describe the show in a sentence what would that be?

A highly crafted and moving poem of celebration to the complexity, resilience and intelligence of women.

One of the women who features in Landscape II is from Afghanistan. What drew you to this character and this country in particular?

News events that occurred around the time of writing. I began to think about the responsibility that I had as a woman and an artist to think about other women’s experiences and consider them. Even if that meant accepting that these might always be irreconciable and mysterious differences.

There is much work that doesn’t conform to theatre, dance or performance structures. Do you think this haziness alienates audiences?

Work that incorporates multiple art forms should not be labelled hazy. Opera for example is a meeting of music, theatre and dance and no one is in any doubt as to what that constitutes. Audiences should be given the chance to discover truly for themselves whether there is something for them to connect with in new work. Taste is the right of all audiences to discover for themselves.