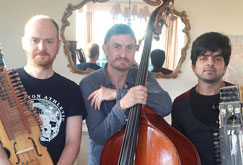 The second Yorkston/Thorne/Khan album represents a confluence of currents, among them the north Indian sarangi; jazz-tinged bass, reminiscent in places of Danny Thompson; acoustic guitar that owes a debt to Elizabeth Cotton, Dick Gaughan and Mississippi John Hurt; and three very different vocalists. The combination is unusual: YTKs Everything Sacred, released in 2016, may be the only precedent. Yet while, on paper, the constituent elements might seem disparate, the new album is, if anything, even more coherent than its predecessor.

YTK released their first album, Everything Sacred, in 2016, but they are hardly lacking in experience. Yorkstons 2002 debut was named Rough Trades album of the year and he has gone on to work with everyone from Kieran Hebden (aka Four Tet) and Hot Chips Alexis Taylor to Martin Carthy and Bert Jansch. He has also released a total of seven acclaimed solo albums alongside many other Fence Records releases. Theres also been a book of tour diaries and, in 2016, the novel Three Craws. The bassist and composer Jon Thorne, who came to prominence with Lamb, has also worked with Iron And Wine, Robert Fripp, Donovon, Sam Lee, Vashti Bunyan and Green Gartside. He and Yorkson have been playing together since 2009. YTK took root when Yorkston met Suhail Yusuf Khan, the award-winning sarangi player and singer from New Delhi, backstage at a gig in Edinburgh. Khan is part of several groups including Advaita, an eight-piece Indian band recorded by John Leckie. His grandfather, Ustad Sabri Khan, played with George Harrison, Pandit Ravi Shankar and Yehudi Menuhin.

Together, they walk on untrodden ground.