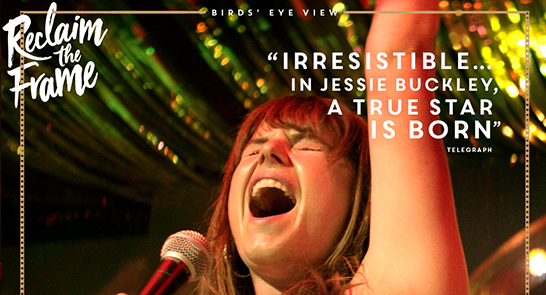 Diamond-in-the-rough Rose-Lynn Harlan (Jessie Buckley) is fresh out of prison and determined to make it as Country star. But her long suffering mother (Julie Walters), who has raised Rose-Lynns two children in her absence, thinks her dream is pie in the sky and demands she put family first. Forced to take a dead end job, she soon discovers a silver lining: her new employer (Sophie Okonedo) has become her biggest fan and wants to help her realise her ambition. With her self- belief restored, however, she begins to discover who she really is and that there is a different path to success.

Written by award winning writer Nicole Taylor (BAFTA for Best Writer for Three Girls and nominated for The C-Word), Wild Rose is a funny, sad, tender and uplifting story that will sweep along even the most hardened movie cynic: in her break-out role, star-in-the-making Buckley is utterly irresistible.

In 2018 Birds Eye View launched the BFI-backed RECLAIM THE FRAME project – a mission to bring to bring ever-greater audiences to films by women to offer a wider perspective of the world. Birds Eye View is a charity whose focus for the last 16 years has been on raising the commercial and cultural impact of films by written or directed by womxn – demonstrating how varied the female gaze can be and celebrating the difference.

After a successful 2018 pilot, working in 5 cities and in 6 cinemas, RECLAIM THE FRAME is coming to Exeter, partnering with the Exeter Phoenix from May 2019 with monthly film events until March 2020. Kicking off with the glorious new British musical WILD ROSE.

Following the screening, Mia Bays the director of Birds Eye View and a producer of Oscar-winning and BAFTA nominated films such as Scott Walker  30 Century Man and Six Shooter will host an A&Q  a conversation with the audience about the film, that flips the usual Q&A format on its head.  Special guest speakers to be announced.

After the panel, poet and filmmaker Be Manzini will share poems reflecting on the themes of Wild Rose and we will then host a poetry workshop called Harnessing Your Authentic Voice, plus drinks and a signup session for the Reclaim The Frame Exeter chapter (free tickets, free films to watch, goodie bags etc).

But why wait until then to claim your free tickets, when you can get involved in the Reclaim the Frame project now by signing up as an Influencer. Find out more here.

To find out more about Birds Eye View, the Reclaim The Frame project and their mission, click here.