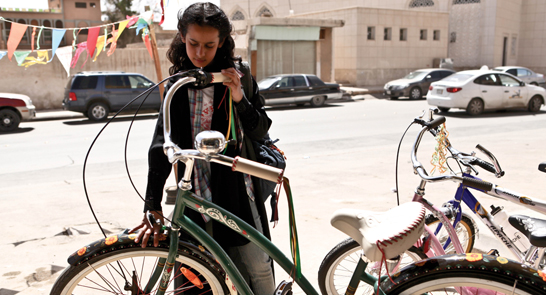 In the first full-length feature film shot entirely inside Saudi Arabia and first by a female director. 10-year-old Wadjada sees a beautiful green bicycle for sale but Wadjda’s mother won’t allow it, fearing repercussions from a society that sees bicycles as dangerous to a girl’s virtue. So Wadjda decides to try to raise the money herself by competing in a Quran recitation competition. The Quran competition isn’t going to be easy, especially for a troublemaker like Wadjda, but she is determined to fight for her dreams… with or without society’s approval.

This is boundary pushing cinema in all the best ways. ????
THE TELEGRAPH

A satisfying and skilfully made film is always something to celebrate, but largely due to the circumstances from which it arose, Wadjda feels like one of the year’s most vital ?????
THE SKINNY