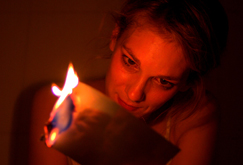 Our cinema may be temporarily closed, but were not going to let that get in the way of bringing arts and culture to Exeter. Welcome to Front Room Phoenix  our way of beaming online creative activity straight to your sofa!

We have teamed up with Eureka Entertainment to bring you an exciting virtual release of new French language drama, Alice. Read on to find out more about the film and how to watch. You will be directly supporting Studio 74  your local independent cinema  the revenue will be split between the distributor and the venue.

Happily married Alices life is turned upside down when she discovers her husband has spent all their money on prostitutes and they are now a year behind on their mortgage. In a last-ditch bid to support herself and her child, Alice becomes a high-end escort, which challenges her perceptions of life and love.

At times bitterly funny but always brutally honest, the film traces Alices journey to her own kind of freedom.

From Fri 24 Jul you can watch Alice online by renting the title from Vimeo. You will be directly supporting Studio 74  your local independent cinema  the revenue will be split between the distributor and Exeter Phoenix.

You can rent the title here >>

Don’t forget to use the promo code ‘phoenix’!