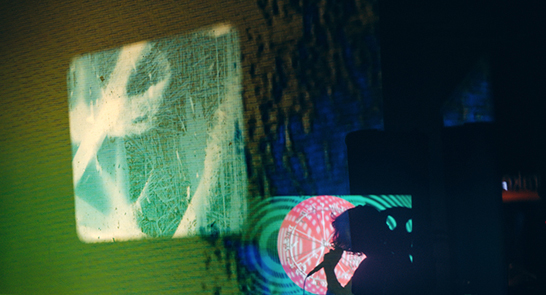 Viridian are an ensemble of interdisciplinary instrumentalists based in Bristol, who advocate for Womxn in experimental arts from eclectic specialisms and backgrounds.

Their ethereal blend of image, voice, cello and double bass re-imagines folkloric forms and tropes of femininity, using improvisation of both sound and image (digital & analogue) to produce a blended dialogue of textural depths.

Inspired by the vanguards of feminist free improvisation such as Les Diaboliques & Feminist Improvising Group, Viridian is open to different levels of musicianship and training; a mix of differing abilities, which champions unexpected collaborations as a serendipitous idiosyncrasy of music and expanded film.

Find out more about Viridian here >>

Over the coming season Exeter Phoenix will be developing Platform, a new programme that reflects the diversity of contemporary visual arts practice made by artists based in the SW region. It will offer opportunities for emerging artists to test out ideas, new work and recent developments in their practice in a public arena, using a variety of spaces throughout our busy building.