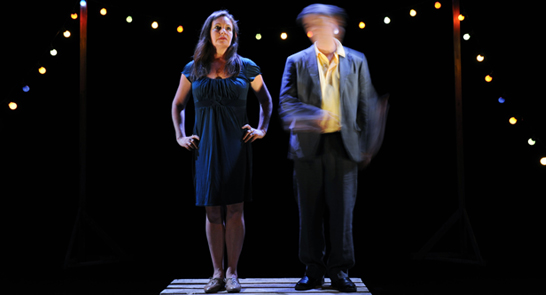 International innovators Forced Entertainments latest performance imagines a multitude of hypothetical futures. Two performers wreathed in coloured lights, like a strange fairground attraction, speculate about what tomorrow might bring. Exploring utopian and dystopian visions, science fiction scenarios, political nightmares and absurd fantasies, the audience is carried along on a flowing tide of conjectures, possibilities and dreams. Sometimes collaborative, sometimes competitive the two performers enjoy the pleasure of invention as their suppositions take them in different directions. Tomorrows Parties is Forced Entertainment in intimate and comical mode – a playful, poignant and at times delirious look forwards to futures both possible and impossible.

Since forming the company in 1984, the six core members of Forced Entertainment sustained a unique artistic partnership for quarter of a century, confirming their position as trailblazers in contemporary theatre. Forced Entertainments trademark collaborative devising process has made them pioneers of British avant-garde theatre and earned them an international reputation.

‘One of Britains greatest theatre companies.’
THE GUARDIAN

‘Forced Entertainment has been pulling the rug from under theatregoers feet for 20 years… theyre not about to stop confounding conventions or exploding audience expectations.’
THE TIMES

Co-production Partners: Tomorrow’s Parties is a production of Belluard Bollwerk International, made possible thanks to a contribution of the Canton of Fribourg to culture. In co-production with BIT Teatergarasjen (Bergen), Internationale Sommerfestival (Hamburg), Kaaitheater (Brussels), Künstlerhaus Mousonturm (Frankfurt), Theaterhaus Gessnerallee (Zurich) and Sheffield City Council. With the support of Stanley Thomas Johnson Foundation