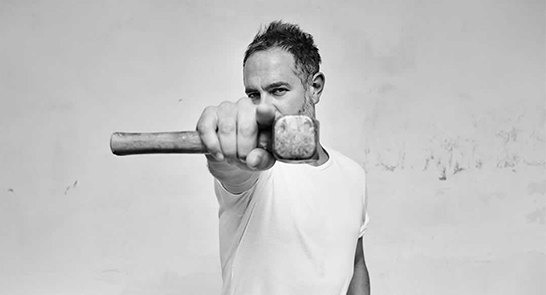 One of the most distinguished song craftsmen of the 21st century makes his long-awaited return with ‘the other side of blue’, his first official release in a decade.

It was in 2008 that Tom brought out the self-funded Skybound, The follow-up to the 2004 debut Feather & Stone, which first alerted the wider world to his singular talent for believable, emotionally immersive composition. Since then, he’s released one fan-only album, travelled the world, been through plenty of soul-searching and emerged at the other end with what may well be his best-ever work.

Baxter made his name with such heart-stopping originals as ‘Better,’ ‘Almost There’ and ‘Day in Verona‘, and his songs have been covered by much-loved entertainers from Dame Shirley Bassey to Boyzone. He’s admired by the likes of Tom Waits, Rufus Wainwright, Gary Barlow and actor David Schwimmer, and by a steadfast set of fans who’ve been waiting for word of his next adventure.

The Other Side of Blue is Baxter’s most searingly personal work to date, performed entirely solo and with gorgeous illustration on guitar and piano. It’s a beautiful and elegant return to his very core as a songwriter and a human being.

‘I feel like i’ve been though a very slow metamorphosis over the years, even i’m not sure into what, but I can say i’m calmer inside, and I thought it was time for a full-on new release’.

While other artists rush so readily to provide the personal information that feeds the beast of self-promotion, tom has kept his counsel, determined to be defined only by his music, and at his own pace. But it has been a tumultuous ten years. he married the longtime girlfriend for whom he wrote the Ivor Novello award-nominated ‘better,’ but then endured a divorce and, more recently, was happily remarried. Along the way, he lived in Devon, travelled to India, Los Angeles, Spain and then Brazil, the place that gave him the impetus to write again.