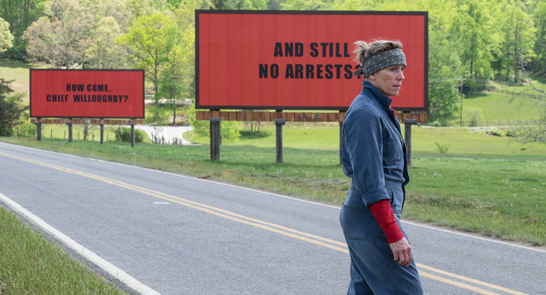 After months have passed without a culprit in her daughters murder case, Mildred Hayes makes a bold move. Taking matters into her own hands, she paints three signs leading into her town with a controversial message directed at the towns revered chief of police, shaming him for not solving the crime. When his second-in-command gets involved, the battle between Mildred and Ebbings law enforcement is only exacerbated.

A quirky emotional puzzle put together by a trickster poet.
VARIETY

A quirky emotional puzzle put together by a trickster poet.
COMMON SENSE MEDIA

The film is as dark as they come, a pitch-black, often laceratingly funny look at human nature at its most nasty, brutish and dimwitted.
WASHINGTON POST