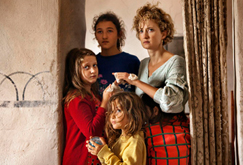 Organised by Valentina Todino for the Italian Cultural Association Exeter collaboration with Danielle Hipkins, Associate Professor of Italian Studies and Film, Department of Italian, University of Exeter. The film will be introduced by Danielle Hipkins.

The Wonders takes place in a rural setting on the borders of Umbria and Tuscany, on a commune created by the international remnants of an unspecified left-wing radical group, now a nuclear family of six and a female helper, Coco. At thirteen, Gelsomina (Alexandra Maria Lungu) is the oldest of four sisters, and the apple of her father, Wolfgangs eye.

Trained to help him with their struggling business of bee-keeping, and put in charge of her siblings, the film charts the breakdown of the familys equilibrium as financial pressure increases and Gelsomina begins to rebel against her role. Two factors contribute to this breakdown: Gelsominas secret decision to enter the family for a run by a local tv station and the arrival of Martin, a child from Germany on a re-deployment scheme after committing petty crime, whom Wolfgang takes on as a farm worker

Enjoy a pizza before the film for just £10*, including your cinema ticket.

The pizza choices are: