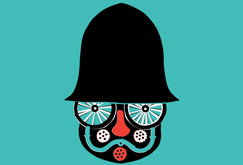 This summer Cornwalls Miracle Theatre ventures into a world somewhere between Alice in Wonderland and Father Ted, where the earth is not round but sausage-shaped; where eccentric policemen fall in love with bicycles and you can visit eternity via a rickety lift, hidden beside a lane in the heart of rural Ireland.

With its hilarious characters, streaks of dark humour and unforgettable plot twist, The Third Policeman earned its author, Flann OBrien, a world-wide reputation as one of Irelands great comic geniuses.

Flann OBriens scorching wit and delicious turn of phrase, combined with Miracles delight in physical comedy and absurdity, has to be a winning combination. Fans of this cult classic and newcomers alike should expect the unexpected!

What people have said about The Third Policeman:

‘A real writer with the true comic spirit.’
JAMES JOYCE

What people have said about Miracle Theatre:

Every Miracle production is a guaranteed winner
WEST BRITON

Miracle are a joy  go and see them!
WESTERN MORNING NEWS