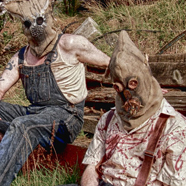 It’s back! The fourth Annual Steampunk Yule Ball returns to Exeter Phoenix, and this year there has been a mutiny on board… Its a Pirate Takeover! Shiver mtimbers!

Featuring some of the best names in the Steampunk world awash on a desert island searching for Pirate treasure. Professor Elemental curates this years Steampunk Pirate Ball and has invited some his most favourite performers to join him including: Birdeatsbaby, The Sweetchunks Band, Gurdybird, Pirate Copy, and Jonty Depp.

Alongside this motley crew we also have a naughty (and nautical) sideshow including Walk the plank with The Wattingers; Von Trappd in the hold; Phantasmagorical Photography with Paul Ligas; Raucous tunes on the Poop Deck with DJ Professor Purblind & DJ Arthur Fawkes-Hake (playing the danciest music from around the globe and beyond). Plus many other wyrd and wonderful characters from the Steampunking universe.

Avast ye! Batten down the hatches and slap on your best steampunk and/or pirating couture and set sail for the Exeter Phoenix this Yule. Weigh anchor and hoist the main sail!

…And more to be announced!