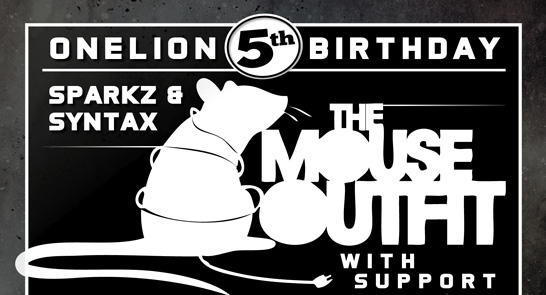 Well, it’s true. Time does fly when you’re having fun.

When I put on the first OneLion event 5 years ago on a Thursday night in Tiverton I had no idea the musical journey I was embarking on. Over the years we have had the pleasure of putting on shows featuring some of my favourite artists from across the UK and now the time has come for our biggest show to date!!

It brings me a huge amount of pleasure to announce that THE MOUSE OUTFIT will be headlining our 5th birthday celebrations at Exeter Phoenix on the 14th of November.

THE MOUSE OUTFIT:
The Mouse Outfit are an 9 piece hip hop band currently rocking shows around the UK and Europe, fronted by Dr Syntax and Sparkz.

Dr Syntax is a rapper from the United Kingdom. The North Oxfordshire countryside, to be exact. While this is hardly a renowned hotbed of hip hop talent, it hasn’t stopped him from establishing himself as one of the most reputed and prolific emcees in the UK hip hop scene. Tracks like ‘Subcultures’, ‘My House’ and ‘Hire Me’ showcase his trademark self-deprecating, dry sense of humour and always-on-point rhyme skills, and have earned this unlikely underground stalwart a die-hard following.

How do I describe The Mouse Outfit? Well, they play an eclectic style of Hip-Hop tinged with some extremely tight jazz musicianship from an extremely talented band that give this LP a very old-school vibe. I am extremely excited for this album as for me, they are one of the greatest musical talents to emerge in the last few years and it brings me great pleasure to be able to finally review it. Every track on this album is absolute Gold but there are some beautiful diamonds hidden in this mountain of treasure which I will unearth for you.

+ Warm up acts including

Skope recently collaborated with Mr Bill on the Auzzie glitch maestro’s artist album, resulting in a next generation glitch n bass hybrid and remixed ‘Jump’ for Vent on Colony Productions, doing the original much justice with a 100 bpm Neurohop remix!

This pace shows no sign of slowing down as his recent work pricked the ears of acclaimed turntablist Krafty Kuts. Skope is now a full member of the band ‘Wicked City’ alongside Dynamite MC, Erb N Dub, Steve Yamaha & Chris Sargent and Krafty Kuts. They recently remixed Mr Scruff’s ‘Get A Move On’ as a collaborative project with the promise of greater things to come and you can expect a fully funked EP from Skope on ‘Instant Vibez’ before 2014 is over!

With an unquenchable lust for new sounds, he aims to continue exploring the sonic spectrum and he has already carved a mark for himself on some of the scenes leading labels such as Caliber Music, Adapted Records and Heavy Artillery.

Acts to be announced soon