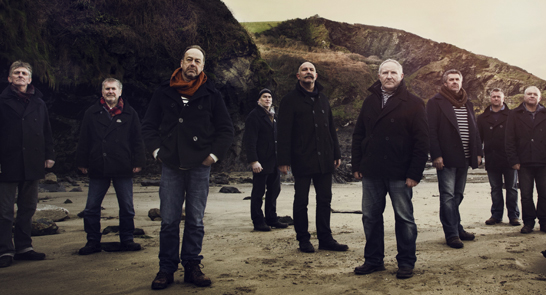 The Fishermans Friends are shanty singers from Port Isaac who have delighted visitors and locals there for more than 15 years, with almost 300 live performances under their belts.

Down on the harbour front of the tiny fishing village of Port Isaac on the north Cornwall coast, the authentic sound of the shanty can be heard loud and clear via the mighty, brawny chorale of The Fishermans Friends. At around eight in the evening during the summer months, tourists and locals gather to hear this nine-man group mesh their voices in an incredibly rousing and joyful set of shanties and Cornish folk songs.

The award-winning band were a surprise hit in the UK top ten album charts with their debut selling more than 150,000 copies and confirming their position as the fastest-selling traditional folk act ever.

Regular festival appearances and starring roles in television commercials followed and they even played the Pyramid Stage at Glastonbury.

English folk music has enjoyed a renaissance in the last decade, especially in the West Country, with the likes of Seth Lakeman, Jackie Oates, Show of Hands, and Jim Causley achieving widespread acclaim. Now, with Port Isaacs Fishermans Friends, the Shanty Man is back in business. Be prepared to have your ears blown clean off