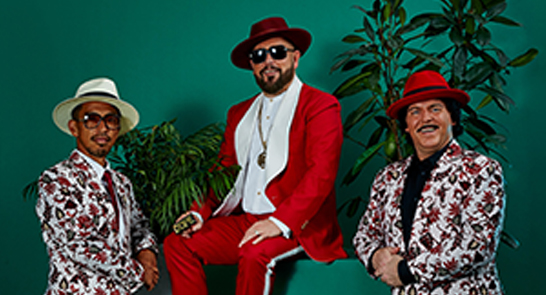 When Mike Keat created Miguel Mantovani, the shameless, moustachioed impresario at the core of the Cuban Brothers, he had no idea that the character would become his career. Two decades on, Miguel and his suspect sidekicks are renowned the world over for their party-starting skills, risqué sketches, B-boy moves and funk-fuelled music.

From sold-out tours, festival spots and support slots for rock royalty to crazy cabaret club nights, film roles and fashion shows, The Cuban Brothers unparalleled act is now ingrained in pop culture. Everywhere from the Far East to South America, from Brisbane to Bahrain, from the Gumball rally to the F1 circuit has fallen for the Hawaiian shirts-sporting crew and their outrageous, X-rated antics.

The Cuban Brothers have also released a Compilation album and a new single I Hate Haters, check it out below.