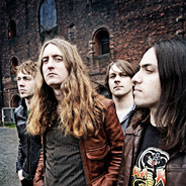 The road to rock n roll glory is littered with the smouldering remnants of bands that blazed brightly for a few brief moments and then fizzled out in a cloud of thwarted ambitions. But every now and then a band emerges that walk, talk and rock like true saviours of our beloved musics spirit and soul. Founded in Northern Ireland in 2000, The Answer have spent the last decade proving their rock n roll credentials and making the kind of life-affirming, eardrum-threatening music that separates the truly great from the merely adequate.

The band emerged into the mainstream spotlight in 2005 when their debut single Keep Believin became the subject of great critical acclaim and led The Answer to the Best New Band award at that years Classic Rock Awards. The following year, this young band consolidated that early promise with Rise, a debut album that received universally great reviews and backed up their burgeoning reputation with fistfuls of gloriously anthemic songs like Under The Sky, Into The Gutter and Come Follow Me that delighted everyone from cantankerous classic rock fans to bright-eyed teenagers with a penchant for balls-out rock n roll.

The end result of their fearsome reputation, both as an astonishing live band and as rocks brightest hopes, was a two-year stint as chief support to AC/DC, which took them around the world and into some of the biggest venues on the planet.