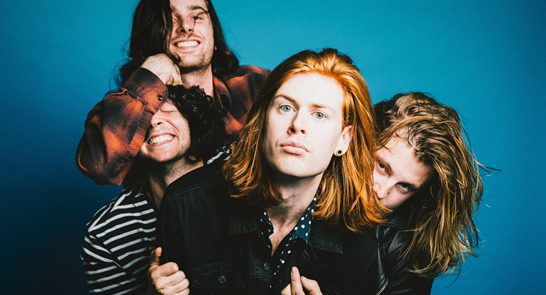 2017 has already been crazy for the band hailing from Reading, with a slot at BBC Radio 1s Future Festival, inclusion in the BBC Sound of 2017 list as well as MTVs Brand New 2017 and NMEs Bands to Listen to in 2017.

Their debut album the self titled The Amazons is due for release in May. Produced by the Grammy nominated Catherine Marks (Wolf Alice, Foals, PJ Harvey) and recorded at the world famous Assault and Battery Studios in west London, the album is the result of The Amazons’ mission statement to reinvigorate rock n roll. Passionate, ballsy, tender and loud as hell, this is an album not just for the young, but the young at heart too.

Bringing their gigantic pummelling choruses and guitar riffs reminiscent of Black Sabbath, The Amazons are all set for a massive year.

‘Its just real, proper, shout-it-out, make your parents tell you to turn it down rock and roll’
MISTAJAM

‘Broods, rattles, and rolls with the best of them.’
DORK

‘One of the most exciting outfits on the live circuit.’
DROWNED IN SOUND

‘One of the best new bands around without question.’
GREG JAMES