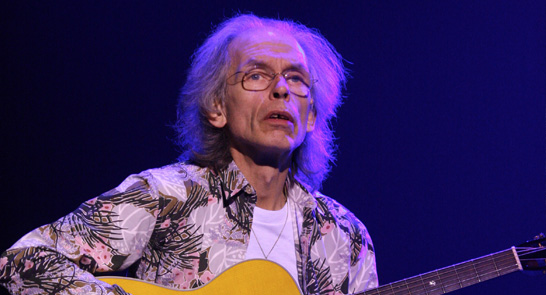 Following a hugely successful return tour in 2013, Steve Howe returns to the UK in September to play some of his more familiar pieces plus several new tunes like Solitaire  from Yes’s  Fly From Here album, The Golden Mean and others from Motif, plus various arrangements of Yes songs and other tunes he’s picked up along the way. A few stories thrown in for good measure should ensure a great evening.

Steve’s enjoyment for all this should be clear and pronounced, as he explores the territory that has helped define him as a world renowned guitar player.

As Steve Howe started playing the guitar over 50 years ago in the 1960’s ‘guitar boom’, he was given some encouragement by his siblings to listen to other styles of guitar playing which lead him to see the broader and more credible approaches that then diversified his own style, quite considerably. Jazz, classical, folk and country were then added to his interest in rock, pop & blues. He listened and watched as Segovia & Julian Bream, Wes Montgomery & Kenny Burrell, Big Bill Broonzy and Albert Lee took the guitar further than what was riding high in the pop charts.

On hearing Chet Atkins album Teensville, he noticed the compelling mix of technics and approaches that made categorising Chet almost impossible, yet defined the versatility that was brought together in one player. In particular Steve was impressed with Chet’s solo arrangements of well known tunes and his own compositions. On the birth of Steve’s first child, Dylan on 4th August 1969, he composed Clap, partly in tribute to Chet, but also inspired by his son’s arrival. This was then released on The Yes Album, his first with the band, then performed on most tour dates. Mood For A Day followed on Fragile and Steve’s ambition to write solo guitar pieces was established. Until the release of Motif Volume 1, his tunes were spread across group and solo releases, often live renditions. The Motif series is an attempt to bring together his compositions and shed light on how they fit together, telling his personal writing story, differing from his contributions to The Syndicats, Incrowd, Tomorrow, Bodast, Yes, Asia, GTR, ABWH and his own Trio.