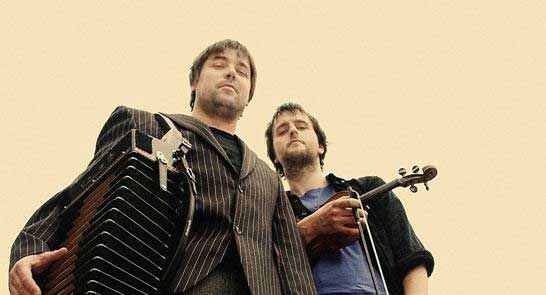 John Spiers & Jon Boden are well known for their involvement as founding members of the big band folk phenomenon that is Bellowhead. They have played together as a duo for over 10 years now and have established themselves as a very well respected act on the English traditional music scene.

Together they play fiddle, guitar, assorted squeezebox instruments, a stomp box and they both sing  a combination which sounds like a two-man-one-man-band! Their music is equally at home playing to 50 people in the intimate setting of the back room of a pub, or 10,000 on the main stage at Cambridge Folk Festival!

‘Theyve recorded five rapturously received albums, expanded the basic duo in to all conquering big-band Bellowhead, and generally given the British folk movement its biggest shot of energy and inspiration for years.’
MOJO MAGAZINE

‘Taking traditional folk music by the scruff of the neck and giving it a thrilling new perspective.’
THE SUN