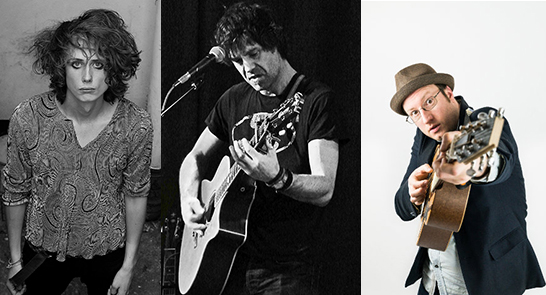 An evening of acoustic songwriting from three of the very best the South-West has to offer.

Set in intimate surroundings, Jamie, Phil and George introduce you to their world of music and lyrics.  Taking turns to talk about and play their songs, these songwriters will give you an insight into how and why they write the songs that they do.  Audience interaction is encouraged!

Phil Cooper is a contemporary singer/songwriter who has earned excellent reviews from the national press, with his thought provoking songwriting and energetic live performances drawing comparisons to Neil Finn, Glenn Tilbrook and Ben Folds.

Jamie R Hawkins is an Award Winning Singer Songwriter whose songs have won him critical acclaim in the UK and around the world – he has been described as ‘a powerful mixture of storyteller, philosopher and poet‘, his lyrics as ‘poignant and witty‘ and his performances, ‘emotive and captivating‘.

George Wilding taught himself to play the guitar after his younger brother started having lessons, and was writing his own songs by the age of twelve. He had shown no particular interest in music in his formative years other than a tendency to hum words rather than speak them.  Shying away from talent shows, he preferred instead to gain experience performing at local open mic slots where he has developed a loyal following. He describes his songs as abstract stories.

‘George has managed to create something that truly stands head and shoulders above the competition. wonderfully timeless the boy is more than a one trick pony’
GREEN MAN PUBLICATIONS