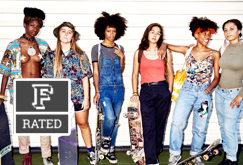 The latest feature film from the director of The Wolfpack, Skate Kitchen follows shy 18-year-old skateboarder, Camille. Camille lives on Long Island with her mother. On Instagram she discovers The Skate Kitchen, an all girl skateboarding crew from New York. Quick to recruit Camille as part of their gang they start featuring her in trick videos and expose her to a wild life shes never experienced. For the first time, she feels acceptance and support from other girls. However, she soon learns the complexity of friendship when she befriends a boy from a rival group of skaters.

Director Crystal Moselle (The Wolfpack) immersed herself in the lives of the skater girls and worked closely with them, resulting in the films authenticity, which combines poetic, atmospheric filmmaking and hypnotic skating sequences.

Skate Kitchen precisely captures the experience of women in male-dominated spaces and tells a story of a girl who learns the importance of camaraderie and self-discovery.

So alive that it pulses and breathes
PLAYLIST

Visceral and joyous
THE OBSERVER

Our 7.30pm screening on Fri 12 Oct will be followed by a special post-screening panel discussion in partnership with WOW Exeter.

Sophie Hellyer is a surfer and writer who divides her time between the Atlantic coast of Ireland, Devon and London. Previously an English and British Champion surfer, Sophie is passionate about creating positive social change: this can be seen in her proactive approach towards protecting our oceans and empowering women.

Dani is a British-Palestinian skater and academic, whose work explores the social and cultural impact of skateboarding in conflict zones. Usually working in site-responsive ways, Dani has come to understand skateboarding (and its relationship to DIY aesthetics, gender, play and urban spaces) as a persistent backdrop to the range of things she does.

Kate is a roller skater & business owner running Momma Trucker Skates on Cowick Street in Exeter. Having skated since she was around 5 years old, Kate eventually joined a local roller derby team not long after getting out of an abusive relationship. Kate also runs a local class teaching children and adults to roller skate and has set up the Exeter chapter for the global Chick in Bowls organisation, which aims to get more people on skates & in the skate parks.

Triple F-Rated: Directed by a woman, written by a woman and starring a significant woman.