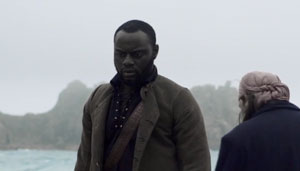 A showcase dedicated to the most promising filmmaking talent from across the South West. Followed by a director Q&A to discuss and share their filmmaking experiences with the audience.

Babies stand at the start of a race track. As they begin to run they morph and grow into more distinctive personalities. Some thrive and some falter as the race soon becomes deadly competitive.

An observational documentary which follows the lives of three transgender subjects, who are at different stages of their transitional journey.

A short film  rendered through a poetic form  that explores the life of a five-year-old. The story is told through her own eyes and in her own words.

10-year-old James and his mum are always making cardboard cars and rocketships, they dream of constructing cardboard box fort. When she falls ill it is left to James, Dad and the local community to organize and construct the thousands of boxes.

A desperate mother risks everything, providing a final lifeline for her son.

After some awkward pleasantries and an exchange of cash Rob presents Edmund with an old, creased photo of a girl. As a queue of clients continue to wait outside, Rob has to decide whether to indulge his fantasy at whatever cost.

Welcome To Britannia. Together We Stand Alone.

A cautionary tale of nationalism (and the relative merits of pasties).