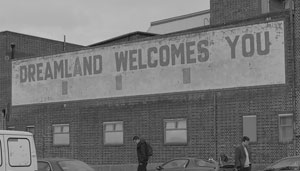 The premiere of Exeter Phoenixs 2017 Artists Moving Image Commission winner Isobel Adderleys W E F E W, with a Q&A from the artist. Adderley’s work explores the preconception of the body and physical space as separate and opposing forces through film, sculpture, live performance and music production. Isobel has recently worked with Random Acts on her piece Qwake and more locally with Somerset Art Works.

A short programme of artists moving image works from exciting new talent will follow the premiere of this commission. Including Golden Berlin Bear nominated HIWA, an experimental short in which a dream set in the streets of Athens turns into a nightmare. While in Maria von Hausswolffs Alien Tourist, an alien lands on a foreign planet, shifting through the dark wilderness.

Taught skin over twisted bones. Hairy skin, caked and matted in mud. Animal or human, human or animal, or neither, or both. Hybrid bodies convulse across the screen. Concrete architecture. Human rocks. Empty space. Hard surfaces merge with skin, with fur, with fabric. Separate elements bound together by new skin grown around them: this place.

In the darkness i can see
no
other

An alien has landed on a foreign planet, where life once existed. Moving aimless through dark shifting nature, glimpses of frozen figures, humans, in a deserted wilderness where the sunlight is now out of reach.

In Jays dream the sun is so weak, you can look straight at it, without getting blind.

A dialectical treatment of our relationship to nature as a warehouse for materials and mystical space of possibilities.

Drifting across the outer edges of a concrete landscape, a twilight meeting engenders a precious moment of connection for a melancholy performer, amid the coldly apathetic city limits.

Jimena’s ex-boyfriend now lives in their old place with his new girlfriend. She still has the keys and things to tell him. She goes in when no one is there because it just feels normal.