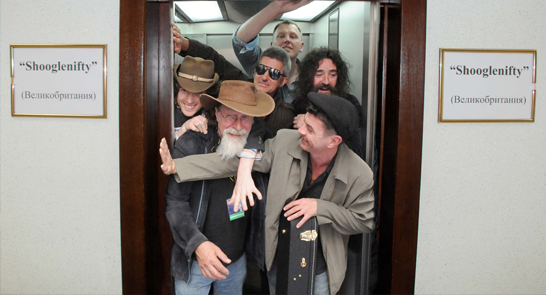 Famous the world over for inventing Techno Ceilidh, Acid Croft and Hypnofolkadelia, Shooglenifty’s original and exciting sound has launched the band on an international career. A wild uptempo mix of trad talent and super funky phonics melding heritage and hedonism into one unbreakable whole.

Shooglenifty is one of Scotland’s most unique musical exports, credited with being the originators of ‘acid-croft,’ a fiery and infectious blend of Celtic traditional music and dance grooves that band members describe as ‘hypno-folkadelic ambient trad.’

Their fiery instrumental lyricism, pulsating with infectious rhythm and drive, creates a sound that is at once epic and inclusive, soulful and stirring; and commands a musical presence that takes the crowd by the hands and dances them on an exhilarating romp through unchartered and fiercely exciting new territory.

‘…a bit like a jam between the Tannahill Weavers, Phish and The Chemical Brothers.’
CHICAGO TRIBUNE