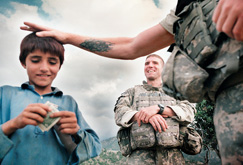 Shadow World reveals the shocking realities of the global arms trade, the only business that counts its profits in billions and its losses in human lives.

Winner of Best Documentary Feature Film at the Edinburgh Film Festival,  Shadow World reveals the real costs of war, the way the arms trade drives it, how weapons of war are turned against citizens of liberal democracies and how the trade decreases rather than enhances security for us all. In shedding light on how our realities are being constructed, the film offers a way for audiences to see through this horror, in the hopes of creating a better future.

Paul Holden, researcher, writer and activist will be joining Studio 74 for a post screening Q&A.

Paul Holden is a South African-born and London-based historian, researcher, writer and activist. He was a leading member of the outreach and engagement team behind the film.

Paul has published four books to date on issues related to corruption, governance and democratic practice in South Africa. Two of his books  The Arms Deal in Your Pocket (2008) and Who Rules South Africa (2012)  were major national best-sellers. His major investigative work to date was the book The Devil in the Detail: How the Arms Deal Changed Everything (2011), which collated the result of years of detailed investigation into South Africas biggest post-apartheid scandal. The Devil in the Detail was published to wide acclaim, with local and international media running lengthy stories based on the new material uncovered.

Since 2009, Paul has worked closely with Andrew Feinstein, acting as the lead researcher for Feinsteins The Shadow World and as co-author, along with fellow colleague Barnaby Pace, of the lead article in the Stockholm International Peace Research Institutes (SIPRI) 2011 Yearbook. The article  discussing the nature of corruption in the global armaments trade  is the first time that SIPRI has dedicated a lead article to this pressing topic.

Paul and Andrew Feinstein have also recently authored an explanatory article on the nature of arms trafficking for the Oxford Handbook for Organised Crime, due to be published soon. Paul has appeared regularly on South African and international news platforms discussing issues related to corruption and its impact on development and democratisation in developing countries.