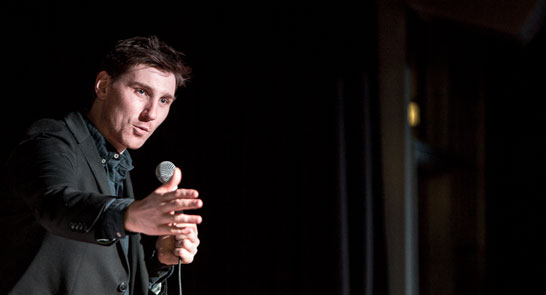 Fresh from opening for Ricky Gervais and Bill Burr on tour, Sean McLoughlin (the best comedian you havent heard of yet – TIME OUT) takes his acclaimed, smash hit show, Hail Mary, on the road.

The human race is at a crossroads: On one path lies the future, with its twitchy technology and mega-corporations who know us better than we know ourselves; On the other lies the past and all the conflict and mystery that entails. In the middle stands Sean, the unlikely everyman, trying to plot a course for both himself and mankind.

As well as providing tour support for Ricky Gervais record-breaking international Humanity tour, Sean was recently handpicked to open for Bill Burr at the Royal Albert Hall and for the legendary Doug Stanhope. Hes also made appearances on Stand-Up Central, Comedy Central At The Comedy Store and fronted a 5-part series for Viceland. His talents have landed him a Chortle Award nomination and a part in new Netflix sitcom After Life.

????1/2 ‘His intellectual and comedic brilliance has everyone rapt’