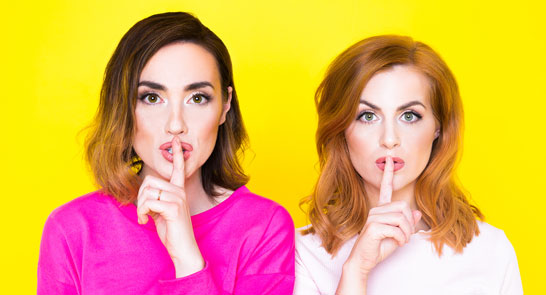 Fun-loving and hilariously offbeat internet stars Rose Ellen Dix and Rosie Spaughton have announced 13 dates across UK & Ireland this October  fans will have an exclusive opportunity to join Rose & Rosie for a live screening of their first feature-length documentary, followed by an intimate Q&A and book signing.

The married British comedy and entertainment duo have gained popularity through their online videos, amassing over 160 million views to date, and quickly becoming two of the most famous LGBT Youtubers and social media influencers in the UK. They won Best British Vlogger at the 2017 BBC Radio 1 Teen Awards, SitC Vlogger of the Year 2017, Celebrity Rising Star award at the 2016 British LGBT Awards and were named on the Pride Power list in 2016.

The documentary accompanies Rose & Rosies upcoming book release, Overshare  out on 4 October published by Trapeze  which delves into to their unique take on love, friendships, fame, sexuality and more, including mental health and LGBT issues. The exclusive screening will show what it means to the girls to be LGBT today, how the social media revolution doesnt have to be divisive and also revealing some of their best-kept secrets!

As visibly out members of the LGBT community, Rose & Rosie overshare about their own experiences, both together and as individuals, spreading a message of positivity and inclusivity and seeking to provide strength to those who have faced similar difficulties. With a true connection to their diverse range of fans, audiences can expect an intimate screening, an opportunity to pose questions to the girls and to meet them up close at the book signing.

Commenting on the tour Rose & Rosie said, We are so excited to go back on tour! Nothing beats meeting our audience in person and being able to share what we’re so passionate about with such an incredible online community! It gives us the chance to come to them, it brings people together and every show is unique! But what happens on tour, stays on tour!

So get ready for tales of love, laughs, sexualityand some saucy secrets, as Rose & Rosie overshare like never before!