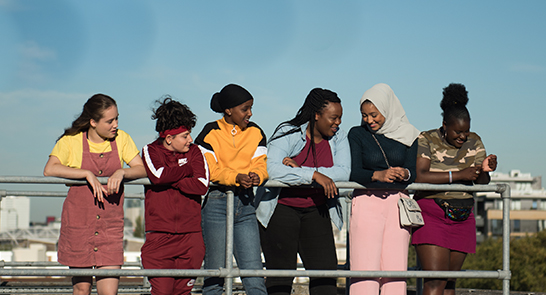 The film follows teenager Rocks (Bukky Bakray) who fears that she and her little brother Emmanuel (Dangelou Osei Kissiedu) will be forced apart if anyone finds out they are living alone. With the help of her friends, she evades the authorities and navigates the most defining days of her life. ROCKS is a film about the joy, resilience and spirit of girlhood.

An energetic five-star triumph ?????
THE GUARDIAN

The most authentic film about British teens in years
THE INDEPENDENT

Reclaim The Frame is a mission to bring ever-greater audiences to films by women to widen and enrich cinemas perspective of the world, run by charity Birds Eye View, and backed by the BFIs Audience Fund. To learn more and join the #ReclaimTheFrame mission and receive free cinema tickets, discount codes and other film goodies go to Bit.ly/BEVRTF

The screening is also available with closed captions and audio description options – contact us for further details.

We the Rocks team are delighted to finally be bringing our special film to UK and Irish cinemas. As a team, we have always felt passionate about the films collaborative nature being acknowledged and credited by all who write about it.  The films story was authored by Theresa Ikoko, a young British Nigerian woman who co-wrote the script with Claire Wilson.  In a unique process, our two writers, the young cast and many of the creative team collaborated on the making of Rocks right from the outset and through to its completion.

At a time when it has become unavoidably clearer that creatives of colour have been, and are, so often unacknowledged, this feels even more important now.  As you can see from our synopsis for Rocks, we speak of the collaboration rather than just referring solely to one directors vision and attribute the way the film was made to that team endeavour.  These are elements which we feel must come through in all that is written about the film, to do justice to the unique way it was made and the people who made it.  We are grateful for all the support Rocks has received – thank you for reading this.