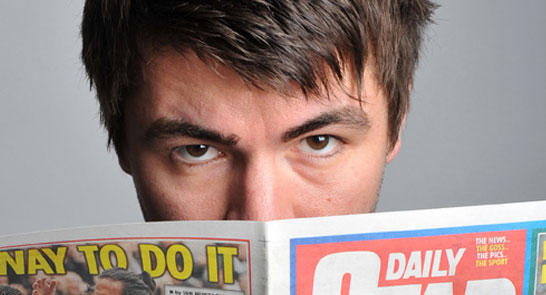 Puncturing the pomposity of the powerful… one tabloid editor at a time.

Grab the inside scoop as red-top renegade Rich Peppiatt delivers a merciless dissection of his former trade, testing the publics right to know to its side-splitting extremity, against the tabloid bully boys themselves.

A daring mixture of live stand-up and outrageous video content, join him as he plots a path to redemption… save one rampage through Fleet Streets gutters.

From undercover escapades to leaving the editor of the Daily Mail cowering in his own home, this is the show you most certainly wont be reading about in any tabloid, EVER.

Rich Peppiatt has appeared twice before the Leveson Inquiry, his searing testimonies making headlines around the world. Since his hilariously withering resignation letter to Daily Star proprietor Richard Desmond became a viral sensation last year, Richs brutal honest and availability at short notice due to lack of gainful employment have made him a regular tabloid commentator on TV and radio.

An important show that deserves a life beyond the Fringe ????
THE TELEGRAPH

The Laugh Out Loud Festival is kindly sponsored by Ashley House: