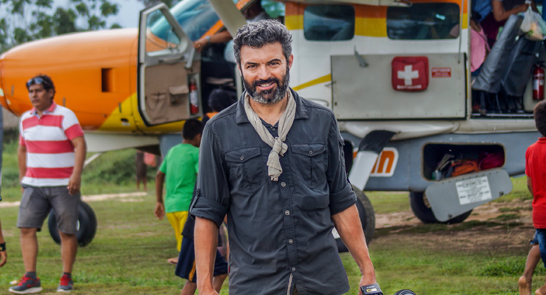 Taking the audience on a breath-taking journey across the continent, filmmaker Reza Pakravan will share tales of his journey to the tense frontiers and enduring traditions of the Sahel.

Situated at the southern edge of the Sahara desert, the Sahelian belt is where climate change has hit hardest, where temperatures are rising faster than anywhere else, and where global warming has contributed to the greatest human migration ever witnessed on the planet.

This is a wounded frontier, populated by men and women who struggle to overcome the horrors of war, terrorism, desertification, and the slow dissolution of their nomadic traditions. And yet, despite everything, they are fighting back. By growing an 8000km Great Green Wall composed of thousands of trees, they are battling to stop desertification and bring life back to the Sahel.

In this high-energy, adventure-packed talk, Reza unearths issues linked to climate-related migration and the impact that desertification has on the lives of the indigenous people who call Sahel their home from the Wodaabe nomads, to climate refugees and Sudanese fighters.

Presented as part of: