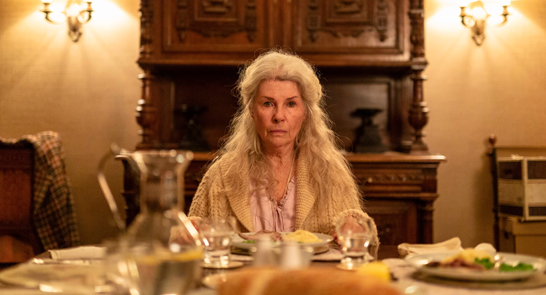 ‘The beauty of this film is that you feel it first, and think about it later’
THE GUARDIAN

A heavy dose of psychological drama puts an unforgettable new spin on the haunted-house movie in this debut from Natalie Erika James.

When her elderly mother inexplicably vanishes, Kay and granddaughter Sam return to their family’s decaying country home in the hope of finding clues of Ednas disappearance. When Edna returns just as mysteriously as she disappeared, Kays concern grows and when her mother seems unwilling or unable to say where she’s been, tension rises between the household. As Edna’s behaviour turns increasingly erratic, it appears something more insidious might be at play as they discover a haunting presence hanging over the home.

At once a heart-breaking allegory for the debilitating effects of dementia and a no holds barred exercise in pure horror, Natalie Erika James immensely satisfying directorial debut may give you sleepless nights, but it also offers much to think about.