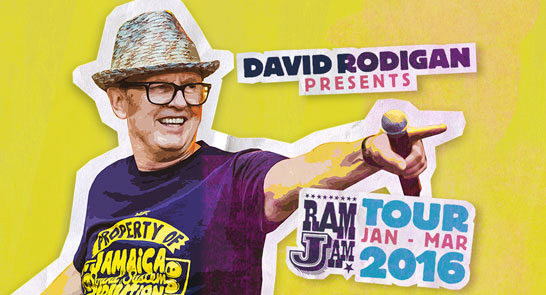 Regarded at the most legendary DJ, broadcaster & ambassador for reggae music of all time, Rodigan has & continues to push the boundaries of the music he loves. With 38 years in the business, he currently holds a number of titles including The World Clash Cup, the Red Bull Culture Clash (with his Rebel Sound team-mates), plus his recent induction into the Reggae Hall Of Fame.

With his 1Xtra & BBC Radio 2 radio shows on smash & a DJ diary bursting at the seams with shows from Jamaica to Tokyo and back to New York, Rodi is busier than ever. A gentleman and true British music icon, his DJ sets have to be seen to be believed. The energy, the knowledge & of course his cult status dub-plate collection! Spring 2016 seems him embark on another Ram Jam UK tour curating line-ups with some of the most exciting & fresh talent around. As David himself says At Ram Jam we join the dots. So get ready to bring the signal!

This event is now taking place at Exeter Phoenix.