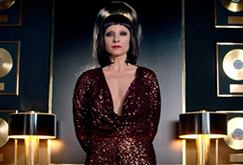 Who Will Sing To You

Dive down the rabbit hole into an enigmatic hall of mirrors featuring a beloved singer and her talented fan; an amnesiac superstar and her devoted assistant; a doting mother and her bullying daughter When an accident leaves fame-weary Lila with acute memory loss, super-fan Violetas remarkable karaoke performance suggests an unusual solution  Violeta can teach Lila to be Lila again. Drawing comparisons with Hitchcock, Bergman and Almodóvar, and voted Best Film by the critics at the San Sebastian International Film Festival, madrileño director Vermut continues to create stylish and exciting cinema packed with complex female leads. With great music, witty dialogue, dark emotions and high drama, this is a hypnotic film to disturb and delight as the sophisticated plot unfurls.