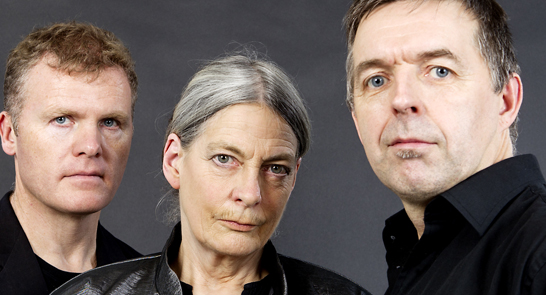 Quercus brings together three of the UKs most creative and original musicians to create beautiful poignant music that transcends musical genres. Drawing on each players repertoire of original, timeless folk songs and reclaimed standard repertoire, the trio subtly recolour the music with their individual palettes to create exquisite acoustic chamber music. It would be hard to put together a group which offers more heartfelt music; from Junes gripping voice and intense delivery to Iains gloriously mellifluous melodies and Huws lyrical off-kilter musicality, the trio carries the audience on a journey through tales of love and loss, bloody battles and beguiling originals.

Quercus are touring in 2013 to celebrate their first release on ECM Records.

As a composer and soloist Ballamy displays a wide emotional range… Musical, ingenious and endearing, this is jazz to listen to again and again.
BBC MUSIC MAGAZINE

June Tabor is quite simply one of Britains greatest interpreters of popular song. She is a performer with an extraordinary range and the ability to mix intensity, passion and drama with a chillingly lived in voice that makes every song sound like a personal experience.
THE GUARDIAN

Huw Warren is one of the UKs truly independent spirits.
THE GUARDIAN