Women Of The World 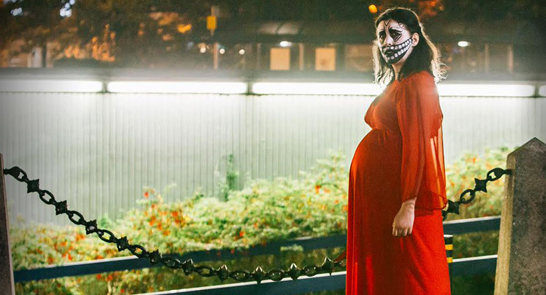 Don your best pyjamas, gather some friends and join us for an alternative Friday night PJ Party as we turn Studio 74 in to a cosy, informal screening space. Chat about the work of women on and off the camera, as well as exploring stories that represent a realistic and inspiring view of the world.

Presented by Holly Tarquini founder of F-RATED, in partnership with WOW and Exeter Phoenix.

Women Of The World Ticket Offer

Alice Lowe (Sightseers), writes, directs and stars in this pitch-black comedy about a pregnant woman on a killing spree.

Seven months into her pregnancy, Ruth mixes maternity with murder believing that her baby is speaking to her from the womb and coaching her to lure and kill her victims. Struggling with her conscience, loneliness, and a strange strain of pre-partum madness, Ruth must ultimately choose between redemption and destruction at the moment of motherhood.

Lowe was over seven months pregnant herself while filming this post-feminist revenge film, which gives an extra edge to the bloody onscreen proceedings and slyly tests our preconceptions. With a richly funny exploration of life and death, Prevenge makes the idea that a mum-to-be could be an unrepentant mass murderer, darkly and devilishly humorous.

???? ‘This impressively peculiar film has the spark of experimental life, an unruly, unfinished quality that adds to its anarchic charm’
OBSERVER

???? ‘Watching Prevenge is like being trapped in a weirdy cheese-dream’
TIME OUT

F-Rating is a new rating for films directed by women, written by women and/or with significant female characters on screen, in their own right. Find out more about F-Rating here >>