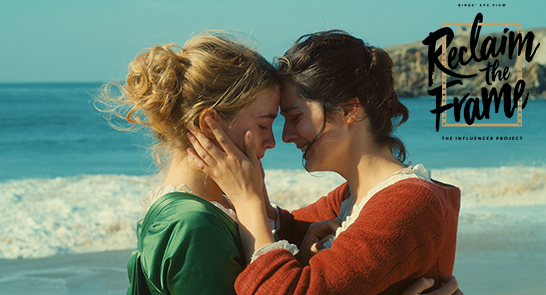 We will be joined by artist Sarah MacGregor who will be drawing one minute portraits from 5:50pm. Sarah will also be leading an informal portrait workshop after the screening, which is open to everyone.

Sarah is a multidisciplinary artist based in Bristol, who has been working in the South West for the past 5 years. She has recently completed an MA in Graphic Arts at UWE, creating work across illustration, animation, textiles and zine-making.

One of the best films to come out of Cannes last year (where it won Best Screenplay and the Queer Palm, as well as countless rave reviews); this is an exquisite tale of female desire, hidden love, art, and the gaze. Set in 18th century Brittany, it follows Marianne an artist commissioned to paint an engagement portrait of Héloïse – a piece of art destined for her future husband (who she has never met).

Héloïse has already refused to sit for another artist so Marianne must pose as a walking companion to Héloïse by day, and capture her likeness on canvas from memory at night. Intimacy and attraction swiftly develop between the two women.

A heart-breaking period piece told with a distinctly modern feminist energy, Sciammas sumptuous masterpiece is one of the most emotional films of this or any other year. Beautifully crafted, its a stunning look at what we can create, how we can live, and who we can love.

The screening will also be followed by an exclusive pre-recorded interview with Director Céline Sciamma and Reclaim the Frame’s Mia Bays.

Reclaim The Frame is a mission to bring ever-greater audiences to films by women to widen and enrich cinemas perspective of the world, run by charity Birds Eye View, and backed by the British Film Institutes Audience Fund. To join the #ReclaimTheFrame mission and receive free cinema tickets, discount codes and other film goodies, click here.