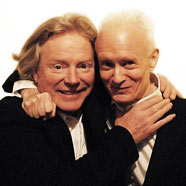 Twenty-five years on from the heyday of the high energy, close-harmony singing duo, Panic Brothers, Reg Meuross and Rich Morton are reuniting for a special limited edition run of gigs and festivals in 2014.

Reg and Rich have lost none of the musical and lyrical edge which established them as a formidable live act, first on the London pub circuit and then leading to five years of successful touring and TV work, with appearances at Edinburgh, Glastonbury, Sidmouth and most of the major British Festivals and also the comedy circuit.

Poet Matt Harvey is one of the most talented of Britain’s working performance poets; comfortable both at Glastonbury and Wimbledon, Matt’s been delighting audiences with his wry, quirky take on life and vegetables on both Radio 4 and in The Guardian.

Peter Farrie is a gifted, independently-minded songwriter, who writes out of the ordinary songs. He is based in Exeter in the south-west of the UK.

After a career in the telecoms industry, Peter released his debut EP in 2009. Since then he has been an Engaged Songwriter with the London Song Company and has created the web project MySongLife, writing and recording a song every month for a period of a year.

His debut album was recorded during 2013 and is slated for release in 2014.