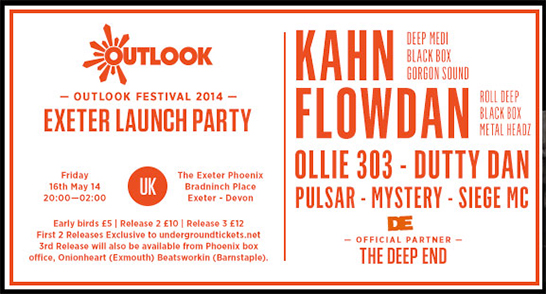 We’re proud to announce we’re returning to Exeter Phoenix after our last sell out show there in January for our 7th birthday.

This time, we’re teaming up with Europe’s top Soundsystem music festival, OUTLOOK, to put on Dubstep’s Top producer and Best Vocalist/MC (as voted in the Dubstepforum 2014 awards).

Since we last booked him in June 2012, Kahn has continued to blow up massively with his mighty sound system banger “Dread” getting snapped up by Mala’s Deep Medi label.

Him and Neek have built up their Bandulu label, with several strong releases since their huge debut collab release “Percy / Fierce”, including more recently their colossal remix of Hi5 Ghost’s “Kung Fu Kick”.

Kahn and Flowdan’s “Badman City” was undoubtedly one of the biggest dubstep tracks of 2013 and Kahn and Neek’s “Soundboy Obliterator” was a definite highlight of the spate of War dubs doing the rounds in late 2013.

As well as punishing VIVEK in the Subdub soundclash, Kahn’s also recently shown his prowess on the decks along with Neek in their guest mix for Madam X’s BBC Radio 1 Xtra show as well as for the Butterz crew on Rinse FM.

His Young Echo collective, along with Vessel, El Kid, Zhou and Jabu continues to go from strength to strength, as does his and Neek’s steppers and sound-system reggae duo “Gorgon Sound”.

Their “Find Jah Way” release was one of the biggest tunes in recent years to be fully embraced by both the Reggae and Dubstep scenes.

Kahn’s productions remain as diverse as ever, with tunes such as his haunting acoustic number “And the world was gone” on Fabric’s highly acclaimed Houndstooth label, his remix of “Balcony” by Cassie and soulful garage track “Angeles” on Soul Motive, showing a softer, more emotional side to his music.

A key member of legendary garage crew, Pay As You Go Cartel, Flowdan saw success with tracks like “Champagne Dance”, before going on to be one of the founding members of pioneering grime crew, Roll Deep. He featured on huge tracks like Celebrate, When I’m ‘Ere and Heat up on our namesake album “In At The Deep End”.

Flowdan has remained a dominant force on the mic in the UK’s bass music scene ever since. He vocalled a string of genre defining dubstep tunes produced by The Bug, such as Skeng, Jah War and Stampin, and has since released strong dubstep tracks with the likes of Suspicious Stench, Kahn and Kaiju (the last 2 of which were widely regarded as a couple of the strongest dubstep releases of 2013.) Demonstrating his versatlity as an MC, he’s also recently vocalled Decibel’s bashment number, Skanks, as well as the massive half time Drum & Bass track “Say Nothin” on Metalheadz (produced by Jubei, and remixed to devastating effect by Rockwell). 2012 saw him rise to the challenge of performing alongside Kaleidoscope Orchestra for his SBTV Track by Track episode.