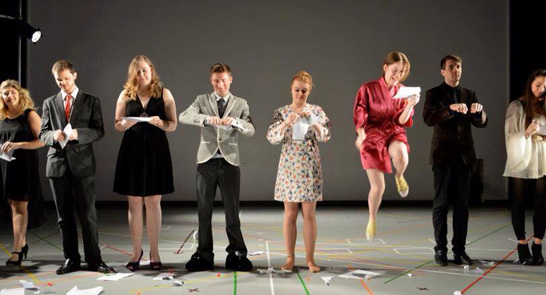 Last nights production was a success, but now costume and props have gone missing and the star is nowhere to be seen. Understudies, stagehands and supporting actors battle their way through what they can remember of the show but in the heroic struggle to entertain tonights audience, doubt creeps in amongst the cast: were there ever actually any stars? Was there even a show? Post Burritos Notes To Help People follows a myriad of characters as they attempt to achieve continuity and authenticity in their performance as the show they seem to be working towards slowly breaks down and evolves into something entirely new. Post-Burrito is a new collective of young theatre practitioners with an international ensemble. Founded earlier this year, the company strives to explore the deconstruction of dramatic conventions through a pastiche of genres and influences and the inspiration they find in everyday life.A real and genuine sense of edginess. – Adam Benjamin, Artistic Director of Candoco