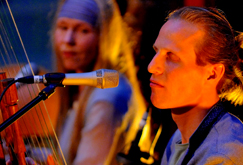 The singer and multi-instrumentalist Nils Kercher draws his inspiration from the traditions of West Africa and from the introspective atmosphere of Nordic vastness and modern songwriting.

He and his Finnish duo partner Kira Kaipainen spread out their treasury of expressive rhythms alongside balafon and the awe-inspiring kora, a twenty-one stringed West African harp. Their “poetic world music” builds into fantastic contrasts while later passing into an almost sacred sound space with a quietly oscillating pulse.

Nils´ achievement is to successfully merge the lyrical, refined aspect of his compositions with his passion for rhythm and energy. The songs feel like a cycle of verses that leave you enchanted long after the music has faded away.