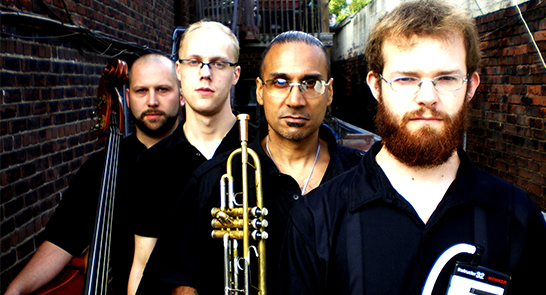 This contemplative and often thrilling quartet’s explorations of modern, original repertoire is led by the 26 year old star of Toronto’s jazz piano community, Nick Maclean.  Formed in 2016, Maclean’s foursome delivers jazz between the two poles of thoughtful introspection and powerhouse performance, taking influences from Herbie Hancock’s primordial 1960’s Blue Note era recordings, while paying tribute to some of the greatest improvisers in jazz history. Nick’s style very clearly reflects Herbie Hancock’s BlueNote sound, but his early influences were Fats Waller, Basie and Ellington. Definitely a gig for modernists happy to move towards the contemporary end of the spectrum.

The group is frequently lauded for the strength of their collective improvisatory vision and, as well as featuring Nick Maclean on keyboards and Brownman Ali on Trumpet, includes two of Torontos top-tier rhythm section 20-somethings: Jesse Dietschi on bass and Tyler Goertzen on drums. The synergy of the 4 is always palpable in concert.

The quartets debut 11-track full-length album Rites Of Ascension features 6 Maclean-penned compositions, 1 Brownman original and 4 re-imagined Herbie Hancock classics, all recorded at the renowned Canterbury Studios in Toronto. Produced by Brownman Ali, this new disk was released on October 31st, 2017 and was nominated for CJSFs 2018 Julian Award of Excellence, it won a Gold Global Music Award in the jazz, band, and album categories, and was featured as one of the Global Music Awards Top 5 Albums of Spring 2018.

Trinidadian-born Brownman Ali stands at the forefront of innovation in the Canadian jazz community. He spent 4 years as the featured trumpet player with Gurus Jazzmatazz, doing 4 world tours, catapulting him into the hip-hop history books. He has since worked with a wide assortment of artists, including Beyonce, Paul Simon and Quincy Jones. In 2009 he launched his own record label: Browntasauras Records. Now, using the label as a breeding ground for new and visionary talent in the modern jazz realm, Browntasauras and Brownman himself are widely regarded as vanguards for the evolution of Jazz in Canada.

‘…A well-deserved award winner in many jazz and music circles, Maclean leads his crew into the untamed wilds of really doing right rather than just showing up. A smoking set that sounds and feels like the real thing, this forward into the past set  where most of the songs are originals  is a first class doozy. Killer stuff throughout.’ Chris Spector, The Midwest Record (Illinois, USA)

‘Personal expression and fun are the hallmarks of Nick Macleans music and both are in abundance here…Trumpeter Brownman Ali, with his crystalline tone, controlled vibrato and precise facility tips his hat to Hubbard while accelerating Driftin into double time… The highlight is the contribution from Ali Madness of Nero which seems to encompass all the stylistic elements of the album into one piece including samples from philosopher Christopher Hitchens.’  Peter Wockner, Jazz and Beyond (Australia)

 Energy is never in short supply in Brownman Ali’s world. This Toronto/Trinidadian trumpeter loves skipping from style to style almost as much as he digs mixing it up with the jazz elite NOW magazine, Toronto

This event is an external hire, to contact the hirer see below